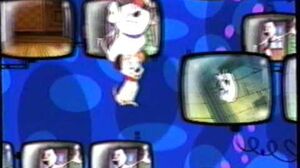 101 Dalmatians: The Series is an American animated television series produced by Walt Disney Television Animation based on the 1961 Disney animated feature film of the same name and its 1996 live-action remake. The series does not take place in the same continuity as the movies; an example of which being the fact that everyone in the series except Cruella has American accents while the film is set in London and its surroundings. The original animated movie is set in the early 1960s, while the live-action films and the series are set in a modern day world. Also for the series, Roger and Anita the dog owners' last name has been changed to "Dearly" instead of "Radcliffe."

Set on a farm, the series focuses primarily on three particular puppies: Lucky, TV expert, leader, and unconventional hero; Rolly, his fat, loyal, scholarly, and always-hungry brother; and Cadpig, their sister, and runt of the family. The three siblings are often joined by Spot, a chicken who wants to be a dog and a member of the "Bark Brigade."

Other puppies appearing in the show have included the brave, three-legged Tripod; the well-meaning but clueless Dipstick; the constantly urinating Wizzer and the indecisive, fashion-conscious Two-Tone.

Reruns continued to air on ABC until 2000, when the series was moved to the Disney Channel and then later to Toon Disney. In March 2007, Toon Disney aired the series for the final time. The series is currently being syndicated on the United Kingdom channel Disney Cinemagic and was also aired on the Latin American version of Disney Channel during 2008, then on January 2, 2010, Season 2 moved to RTE Two in Ireland. It also aired a few times in early 2011 (on Fridays at 4 a.m.) on Disney Junior, but after four airings, it was discontinued. As of March 23, 2012, 101 Dalmatians reruns returned to the Disney Junior Channel and Disney XD but on September 3, 2013 and June 28, 2014 respectively, it was removed from both channels.

101 Dalmatians: The Series has a total of 65 episodes spread over 2 seasons that were produced from September 1997 to March 1998.