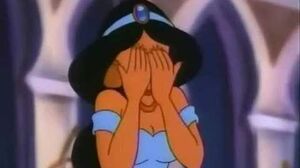 Aladdin is an American animated television series made by Walt Disney Television Animation which aired from 1994 to 1995, based on the original 1992 Disney film of the same name. It was animated at the Slightly Offbeat Productions Studios in Penrose, Auckland, New Zealand.

Many of the films' stars provided the voices of their TV counterparts, with the notable exception of Dan Castellaneta filling in for Robin Williams in the Genie role (like in The Return of Jafar). Unlike The Little Mermaid TV series, this series does not feature any musical numbers.

Nine episodes were first aired as a preview for the series on The Disney Channel in early 1994, and in September of that year it began airing concurrently on the syndicated "The Disney Afternoon" block and on Saturday mornings on CBS (prior to Disney's purchase of rival ABC). Disney Channel reran the series in the late-1990s until it was replaced by their pre-teen lineup.[1] The show was later shown on Toon Disney, but has since been removed.

Coming on the heels of the direct-to-video sequel film The Return of Jafar, the series picked up where that installment left off, with Aladdin still living on the streets of Agrabah but now engaged to beautiful and spunky Princess Jasmine. "Al" and Jasmine, along with monkey sidekick Abu, the animated Magic Carpet, and the fast-talking, shape-shifting Genie came along to help, as did sassy, complaining parrot Iago, formerly Jafar’s pet but now an antihero face off against sorcerers, monsters, thieves, and more throughout the series.

Princess Jasmine (voiced by Linda Larkin) — Jasmine is the beautiful and well sought-after Princess of Agrabah who, in the series, is now engaged to Aladdin.

Genie (voiced by Dan Castellaneta) — The Genie has a major supporting role in the Aladdin television series, although his contributions are sometimes limited; as an apparent side-effect of being freed from the lamp, his powers have been downgraded from his original 'phenomenal cosmic powers' to 'semi-phenomenal, nearly cosmic powers', with the result that the once-omnipotent Genie is now incapable of undoing some of the spells he is confronted with and lacks some degree of his old intellect. However, he is still an indispensable member of Aladdin's team. There were many, many occasions in the TV series where the Genie's magic was crucial for the heroes to win, and the situation would have been hopeless without him.

Iago (voiced by Gilbert Gottfried) — In the series, he can speak fluent English and has the ability to perfectly mimic other characters' voices and also possesses knowledge of various tricks learned from Jafar. He is easily frustrated and openly vocalizes his frustrations, and avoids direct confrontations if he can help it, but when required, he can be quite cunning and mischievous. Iago is also known for his notorious greed of treasure and gold, for which he will go to outlandish lengths to acquire. He provides a sarcastic, realistic, or cowardly perspective on events and is only really willing to face danger if great reward is promised. However, he is sometimes forced to battle his conscience, and generally does the right thing even when he doesn't have to.

Abu (voiced by Frank Welker) — Abu plays a supporting role in the TV series, often accompanying Aladdin in his adventures. In the series, it is shown how Aladdin and Abu first met during Abu's time working with a group of circus performers, during the two-part episode "Seems Like Old Crimes." Throughout the series, he is occasionally shown at odds with Iago, but several episodes portray them as close friends with a friendly rivalry.

Magic Carpet — An ancient carpet that was found by Aladdin in the Cave of Wonders' treasure room. It is a character without a voice, and expresses itself entirely through pantomime and movements. In the animated series, The Magic Carpet appears both as a means of travel and a reacting character to the events of the stories. The magic of the carpet is strong enough to levitate an entire ship.

Aladdin has a total of 86 episodes spread over 3 seasons that were produced from September 1994 to November 1995. After the series another direct-to-video movie, Aladdin and the King of Thieves, was released. This was followed by a guest appearance on November 24, 1998 in "Hercules and the Arabian Night," an episode of Hercules.