All Dogs Go to Heaven: The Series 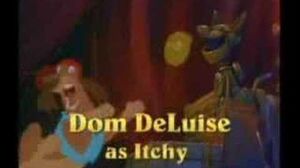 Don Bluth’s 1989 animated feature All Dogs Go to Heaven featured a roguish German Shepherd named Charlie who died, went to heaven, conned his way back to earth for vengeance on his killer Carface and then found redemption through a little orphaned girl named Anne-Marie. The film was popular with audiences, spawning a sequel, All Dogs Go to Heaven 2 and this animated series.

Most of the voice actors from the feature films reprised their roles in the series, including Dom DeLuise, Ernest Borgnine, Charles Nelson Reilly, Bebe Neuwirth, Sheena Easton, and Adam Wylie. Steven Weber provided the speaking and singing voices of Charlie B. Barkin, who was voiced in the films by Burt Reynolds and Charlie Sheen (and sung in the second film by Jesse Corti).

On December 3, 2013, TGG Direct released All Dogs Go to Heaven: The Series - Complete Series on DVD. The 7-disc set features all 40 episodes of the series as well as the TV movie An All Dogs Christmas Carol.

Even though the series is supposed to take place after the second film, several changes were made to the subject matter. For example, Charlie and Sasha were shown as having gotten together at the end of the second film, however, in the series, they are not together. Also, Itchy decides to stay in Heaven in the film, but he is alive in the series.

In the series Charlie and Itchy live in San Francisco as guardian angels, being told of their missions by Anabelle but also become embroiled in several misadventures in each episode, while trying to do the right thing.

All Dogs Go to Heaven: The Series has a total of 40 episodes spread over 3 seasons that were produced from September 1996 to November 1998. A Christmas special titled An All Dogs Christmas Carol was produced in 1998 for ABC and served as the series finale.