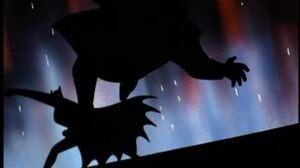 Batman: The Animated Series was an American animated television series based on the DC Comics superhero, Batman. The series was produced by Warner Bros. Animation and originally aired on the Fox Network from September 5, 1992 to September 15, 1995. The series was the first in the continuity of the shared DC Animated Universe, and spawned the film Batman: Mask of the Phantasm. The visual style of the series, dubbed "Dark Deco," was based on the artwork of producer and artist Bruce Timm, The series was widely praised for its thematic complexity, dark tone, artistic quality and faithfulness to the character's crime-fighting origins. The series also won four Emmy Awards, including Outstanding Animated Program.

The series features the adventures of the Dark Knight of Gotham City as he battles the evil that inhabits the city with the occasional help of Robin and Batgirl in stories that are faithful to the comics in both spirit and tone.

New villains such as Red Claw, Baby-Doll, Kyodai Ken, Tygrus, and the Sewer King were invented for the series, but to little acclaim. On the other hand, the Joker's accomplice Harley Quinn, Gotham City police detective Renee Montoya and the vigilante Lock-up achieved such popularity that they became characters in the comics. Older villains that were lesser known from the comics, such as Count Vertigo, the Mirror Man and the Clock King, were modified for the series in both appearance and personality. The series was also the first to suggest that Harvey Dent had a pre-existing dual personality before becoming Two-Face. This idea came from Alan Burnett, one of the series' producers and head writers.

Aside from creating characters that crossed over into the main line of DC Comics, several of the series' reinterpretations were carried over as well. Mr. Freeze was revised in the comics to emulate the series' tragic story, the success of which actually compelled DC to bring the character back after "killing" him off some years earlier, Clayface was revised to be much more similar in appearance to his animated counterpart, and Two-Face's double-sided, black-and-white suit has become a common appearance for the character.

One of the most noteworthy changes made in Batman: The Animated Series was the treatment of Batman's alter-ego Bruce Wayne. In nearly all other media, including the comics, television shows and films, Bruce deliberately plays up his image as a self-absorbed and not-too-bright billionaire playboy. In the animated series, his character is instead treated more seriously; he is assertive and intelligent, and actively involved in the management of Wayne Enterprises, without jeopardizing his secret identity. For example: in the episode "Eternal Youth", Bruce is shown angrily ordering one of his directors to cancel a secret deal with a timber company in the Amazon rainforest. In addition, during the episode "Night of the Ninja", he revealed to reporter Summer Gleeson that he has some martial arts training, as the reporter previously researched that he once lived in Japan, though he later throws a fight with the ninja Kyodai Ken in front of Gleeson to disguise his prowess. The psychological issues stemming from his parents' deaths are usually shown in the form of self-hatred when Bruce is alone. Voice actor Kevin Conroy is notable for being the first person in animation to use two distinct voices to portray Bruce Wayne and Batman, which was his own idea.

The series took influence from Tim Burton's live-action films Batman and Batman Returns, and the acclaimed Superman theatrical cartoons produced by Fleischer Studios in the early 1940s. In designing the series, Bruce Timm and Eric Radomski emulated Burton's films' "otherworldly timelessness", incorporating period features such as black-and-white title cards, police blimps (though no such thing existed, Timm has stated that he found it to fit the show's style) and a "vintage" color scheme with film noir flourishes. In addition, Radomski issued a standing order to the animation department that all backgrounds be painted using light colors on black paper (as opposed to the industry standard of dark colors on white paper). The distinctive visual combination of "noir" imagery and Art Deco design was dubbed "Dark Deco" by the producers.

The series initially took a variation of music written by Danny Elfman for the Burton films as its theme, later episodes of the series used a new theme with a similar style by Shirley Walker (Walker was occasionally Elfman's conductor for films on which they collaborated). The score of the series was influenced by Elfman and Walker's work on the Burton films, as well as music of 1940s film noir.

The series was more adult-oriented than previous superhero cartoons. It was the first such cartoon in years to depict outright physical violence against antagonists (though only one character was depicted as having been shot — Commissioner Gordon, in the episode "I Am the Night", is shown lying unconscious due to a gunshot wound he received offscreen) and one of the first animated shows in years to depict realistic firearms. First-time producers Timm and Radomski reportedly encountered resistance from studio executives, but the success of Burton's first film allowed the embryonic series to survive long enough to produce a pilot episode, "On Leather Wings", which, according to Timm, "got a lot of people off our backs".

The series was also notable for its supporting cast — a number of well-known actors provided voices for various classic villains, most notably Mark Hamill (previously famous for his role as Luke Skywalker in the original Star Wars trilogy), who later found success in voice acting thanks to his "cheerfully deranged" portrayal of the Joker. The recording sessions (under the supervision of voice director Andrea Romano) were recorded with the actors together in one studio (as opposed to industry standard of voice actors recording dialogue separately). This method would later be employed for all subsequent series in the DC animated universe.

One of the series' best-known innovations was the Joker's assistant, Harley Quinn, who became so popular that DC Comics later added her to mainstream Batman comic book continuity. The Penguin underwent change for the series, his appearance was remodeled after the version seen in Batman Returns (though still incorporating classic elements of the character), which was in production simultaneously with the series' first season. New life was also given to lesser-known characters for the series such as the Clock King. In addition, dramatic changes were made to villains such as Clayface and Mr. Freeze — the latter character, for example, was changed from a gimmicky mad scientist to a tragic figure whose "frigid exterior hid a doomed love and vindictive fury".

Batman: The Animated Series has a total of 109 episodes spread over 4 seasons that were produced from September 1992 to January 1999.

Batman: The Animated Series premiered on the Fox Network's children's block Fox Kids on September 5, 1992 and aired in that block during weekday afternoons at 4:30pm. In December, just three months after its debut, Fox also began airing episodes of the series on prime-time Sunday evenings, marking one of the few times a show created for Saturday Morning Television was scheduled for prime-time broadcast. However, the TV ratings fell short (as the show aired opposite the perennial favorite 60 Minutes), and the series was removed from this time slot in March 1993.

After the series produced its 65th episode (the minimum number necessary for a TV series to be successfully syndicated), Fox Network executives ordered a second season of 20 more episodes that was later reduced to airing weekly on Saturday mornings. The second season featured Robin more prominently and, as a result, was retitled The Adventures of Batman & Robin in the title credits; this run of episodes had two new opening sequences and ending credits. In total, Batman: The Animated Series reached 85 episodes before finishing its original run of episodes on September 15, 1995.

Cartoon Network began airing re-runs of the series on March 2, 1998. From 1998 to 1999, the show was aired after Cartoon Network's action block Toonami, and then in 2000 it was aired on Toonami itself.

The show later began re-airing on September 30, 2007 on Toon Disney's Jetix lineup, again alongside Superman: The Animated Series (despite Warner Bros. being one of Disney's biggest competitors).

The Hub started broadcasting the series on September 6, 2011. The network aired a 10-episode marathon of the series on July 20, 2012 to coincide with the theatrical release of The Dark Knight Rises and even created an animated version of one of the film's trailers, featuring Kevin Conroy and Adrienne Barbeau re-dubbing Batman and Catwoman's dialogue from the trailer.

In Italy, the series re-ran on Mediaset.