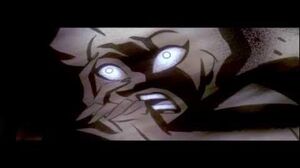 Batman Beyond is an American animated television series created by Warner Bros. Animation in collaboration with DC Comics as a continuation of the Batman legacy. Depicting teenager Terry McGinnis as a new Batman in a futuristic Gotham City under the tutelage of an elderly Bruce Wayne, the series began airing on Kids' WB on January 10, 1999, and ended its run on December 18, 2001. After 52 episodes spanning three seasons and one direct-to-video film, the series was put on hold for the Justice League animated series despite the network having announced plans for a fourth season. Batman Beyond is set in the chronological future of the DC Animated Universe.

Batman Beyond is said to explore the darker side of many Batman projects, playing on key elements such as emotions, personal relations, fear of the unknown, technological malfunctions and the disturbing psychological elements of the character of Bruce Wayne. As such, it was considerably darker than most other children's programs at the time, although producer Bruce Timm recalls it was conceived as a kid-friendly Batman cartoon. It is also the first Batman series to portray the hero as a teenager. IGN named the show 40th on their list of "Top 100 Animated TV Series." The continuity of Batman Beyond has made various crossovers into comic books published by DC Comics, including an ongoing series that began in 2011. Batman Beyond last aired on the television channel The Hub.

At least 40 years after the "current" adventures of Batman and 20 years after Bruce Wayne retired from the role, his secret is discovered by troubled teen Terry McGinnis. After McGinnis' father is murdered by the man who took over Bruce Wayne's company, under the supervision of an elderly Bruce Wayne, McGinnis dons a high-tech Bat suit that Wayne last used, creating a new hero for a harsh futuristic Gotham.

Terry McGinnis (Batman) (voiced by Will Friedle) — is an athletic teenager highschooler and reformed troublemaker with a deeply ingrained sense of personal justice. After being saved by Bruce Wayne from a gang in front of Wayne Manor, Terry stumbles upon the Batcave and discovers Bruce Wayne's secret. Upon returning home Terry finds his murdered father and discovers that the culprit is none other than the man in charge of Wayne's company. After stealing the batsuit Terry tracks down and defeats his father's killer. Bruce Wayne then decides that Terry will take on the mantle of Batman. Over the series Terry and Bruce developed a respect for each other, with Terry regarding Bruce as a surrogate father.

Bruce Wayne (voiced by Kevin Conroy) — Now an old man, Bruce has retired from wearing the cowl, and has put that part of his life behind him. Until he meets Terry McGinnis who figures out his secret and decides to become the new Batman for a futuristic Gotham that desperately needs him. Bruce assists Terry in the field primarily by keeping in continual contact with him from the Batcave. The Justice League Unlimited episode "Epilogue" reveals that Terry is Bruce's biological son due to Amanda Waller's "Batman Beyond" project. The project caused Terry's father to have his reproductive DNA overwritten and made Bruce's reproductive DNA dominant when Warren McGinnis took a fake flu shot before Terry's conception.

Maxine (Max) Gibson (voiced by Cree Summer) — Terry's classmate and closest friend. She is exceptionally capable when it comes to computers and electronics, Max created a program that succeeded in uncovering Batman's secret identity. After unmasking Terry, she insisted on being a part of his secret life and helped him with everything from computer hacking to babysitting to detective work.

Dana Tan (voiced by Lauren Tom) — Although Terry flirted with several girls throughout the show, his true love has always been Dana Tan, whom he met while attending Hamilton Hill High School. Despite their commitment to each other, their relationship was strained as early on Terry struggled to balance his dual obligations. The two verged on the possibility of breaking up multiple times.

Commissioner Barbara Gordon (voiced by Stockard Channing (1999-2000); Angie Harmon (2000-2001)) — Terry upheld tradition by forging an alliance with Gotham City's Police commissioner, Barbara Gordon, former Batgirl and the daughter of Commissioner Jim Gordan, the original Batman's trusted ally. The alliance started out a rocky one, as Barbara never failed to take Terry's juvenile record into account and believed he was too reckless for the role of Batman. Barbara was reluctant to assist the new Batman and to have a teenager as Gotham's new protector but eventually warmed up to him.

Batman Beyond has a total of 52 episodes spread over 3 seasons that were produced from January 1999 to December 2001.