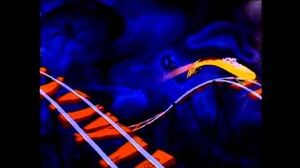 The series focuses on the life of Goth girl Lydia Deetz and her undead friend Beetlejuice as they explore The Neitherworld, a wacky afterlife realm inhabited by monsters, ghosts, ghouls and zombies. Danny Elfman's theme for the film was arranged for the cartoon by Elfman himself.

Episodes generally centered on the ghostly con-man Beetlejuice, his best (and only true) friend Lydia, and their adventures together in both the Neitherworld and the "real world", a fictional New England town called Peaceful Pines ("Winter River" in the film).

Beetlejuice's core character, that of a ghostly con artist, remained fundamentally the same as in the original movie, but was considerably softened, from maliciousness to pranksterism; nor, in the series, did he display the rampant lechery he did in the film, only occasionally embracing (or being embraced by) Lydia as between good friends. Although he had been seen ogling particularly gorgeous ghouls from time to time.

Lydia's character is portrayed as an upbeat goth girl who likes "weird" things from spiders to sloppy horror movies. As in the film, Lydia could summon Beetlejuice out of the Neitherworld (or go there herself) by calling his name three times, sometimes as part of a set chant:

Occasionally, there are other effects from that chant, such as Lydia's room changing to a gothic castle. On a few occasions, other people and ghosts went to the Neitherworld or the living world, either when Lydia takes them with her by chanting Beetlejuice's name, or presumably through a door that connects Lydia's and Beetlejuice's homes.

The series' humor relied heavily on sight gags, wordplay, and allusiveness. Many episodes, especially towards the end of the run, were parodies of famous films (such as Brigadoon, Shane, Mr. Smith Goes to Washington, The Wizard of Oz, It's A Wonderful Life and Moby Dick), books, and TV shows (such as Masterpiece Theatre, Pee-Wee's Playhouse and The Twilight Zone).

Throughout the series, Beetlejuice would often try to scam residents of the Neitherworld—and, sometimes, the "real world" as well (Lydia's parents were occasional unwitting victims of his pranks) – by various means, from "baby-sitting" (in which he literally sits on the grotesque Neitherworld babies) to trying to beat them in an auto race. Some humor also comes from Beetlejuice's fear of Sandworms. This was hinted at in a single line of dialogue in the movie but was much expanded on in the series.

Beetlejuice (voiced by Stephen Ouimette) — A Ghost and titular character of the show. His name-proper is "Beetle Juice Jr.", but is known better throughout the Neitherworld as "Beetlejuice", (all one word). He is the son of Gnat and Bee Juice and has a "disgustingly cheerful" younger brother, called Donny Juice. Beetlejuice's usual attire consists of a matching suit with vertical black-&-white stripes, a magenta-colored shirt and a black tie, and a pair of beatle boots.

Beetlejuice, (often addressed as just "Beej" or "BJ" by Lydia), is able to change shape, transform and conjure objects, teleport, and perform other feats of magic, although his powers can be reduced by various circumstances, such as encounters with Sandworms (despite the fact that he has enough power to subdue or repel them with ease) or when his head becomes separated from his body. At times, he must pause to think of exactly how to use his powers to escape a precarious situation unscathed.

Lydia Deets (voiced by Alyson Court) — A Goth girl in her preteens at the start of the series, and early teens later in the series. Lydia is established as being a creative, bright, sharp, yet eccentric young girl, but otherwise Lydia's unique outlook on life makes her stand out from most of the other school-girls, which leaves her feeling out of place and alone in the real world, finding it difficult to fit in well with most of her classmates—leading her to frequently visit and seek out reassurance with her closest friend, Beetlejuice, in the Neitherworld, where she is accepted and loved for who she is as a person. Her regular outfit at home is a long dark purple top, a pair of black leggings, a light purple and pink sash tied around her waist and black slipper-shoes. Her Neitherworld attire consists of a large spiderweb pattern red poncho, over a full-body black leotard, (the ends of the sleeves are like finger-less gloves, and the bottom of the legs double as footwear).

Lydia is an amateur but nonetheless talented photographer, entomologist, seamstress, and sketch artist with an innate affinity and love for all things gross, scary, weird, surreal and macabre. Despite her love of all things 'strange and unusual', Lydia is also a positive, well-mannered, friendly and patient girl, and aside from also being emotionally mature for her age, Lydia can be accredited as being very responsible for a girl in her age group. Lydia is also shown to be a naturalist, shown to feel very strongly about environmental issues. She has also shown that she is extremely gifted with anything mechanical and understands a lot about cars.

The series was a breakout hit for ABC in its initial season, and later became one of the first animated series to air on FOX's weekday afternoon children's lineup. This led to a situation whereby Beetlejuice was being seen Monday through Friday on FOX while still remaining on ABC's Saturday morning schedule, making it one of the few shows in American television history to be aired concurrently on two different broadcast networks. Beetlejuice has aired in re-runs on Nickelodeon and Cartoon Network (where the movie also aired). The series aired on Teletoon Retro in Canada from fall 2009 until June 2011, and then returned in April 2013.

The episode "Brides of Funkenstein" was based on an idea submitted by a then-teenage girl, who was a fan of the show.[2]

In 1990 the series won (shared with The New Adventures of Winnie the Pooh) a Daytime Emmy Award for Outstanding Animated Program.

Beetlejuice has a total of 80 episodes spread over 4 seasons that were produced from September 1989 to December 1991.

Much as with the original 1988 film, various merchandise was released for the Beetlejuice animated series in 1990. This included trading cards by Dart, a sticker album and sticker/activity book by Panini, a jigsaw puzzle by Golden, a coloring book, a lunchbox and thermos set, Valentine's, a party centerpiece by Party Creations, a PC game by Hi-Tech Expressions, and six PVC figures available with Burger King Kids' Meals. Kenner, the company behind the Beetlejuice movie action figures, had begun developing figures for the animated series, but the project did not come to fruition.