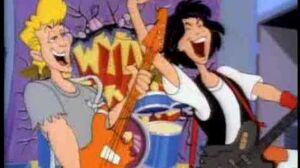 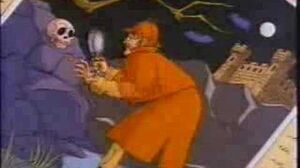 Bill & Ted's Excellent Adventures is a 1990 spin-off animated series based on the 1989 film of the same name. The series follows the misadventures of two time-travelling slackers as they travel into the distant past and future. The first season was produced by Hanna-Babera Productions and aired on Syndication, with Keanu Reeves, Alex Winter, George Carlin, and Bernie Casey reprising their film roles.[1]

In the second season, the show switched production companies and networks, now airing on Fox's Fox Kids block[2] and produced by DIC Entertainment. As Fox was also planning on airing a new live-action series of the same name,[3] the cast was replaced, and the leads were now voiced by Evan Richards and Christopher Kennedy, the actors who respectively portrayed Bill and Ted on the short-lived live-action series. The new episodes introduced a "Squint" phone booth that could take Bill and Ted into literature, television shows, and (after shrinking them) inside the human body. The new show had trouble catching on, and after one more season, Bill & Ted was cancelled.

High School slackers Bill and Ted, with the help of Rufus, use a time traveling telephone booth to visit different points in our history and future. As the two meet up with various historical figures, they get into various adventures and scrapes along the way, but always manage to survive by means of their unusual talents.

Ted "Theodore" Logan (voiced by Keanu Reeves (season 1); Evan Richards (season 2)) — One of the two main characters and member of the band Wyld Stallyns. Ted and his best friend Bill travel through time on amazing adventures as they meet famous historical figures.

Bill S. Preston, Esq. (voiced by Alex Winter (season 1); Christopher Kennedy (season 2)) — One of the two main characters and member of the band Wyld Stallyns. Bill and his best friend Ted travel through time on amazing adventures as they meet famous historical figures.

Rufus (voiced by George Carlin (season 1); Rick Overton (season 2)) — Rufus is a man from the future that gave the time machine to Bill and Ted. Rufus often shows up on Bill and Ted's time traveling adventures to help them.

Mr. Ryan (voiced by Bernie Casey) — In the series, Mr. Ryan received a promotion to Vice Principal of Bill and Ted's high school. In the film he was the boys' history teacher.

Detective Logan (voiced by Peter Renaday) — Ted's strict police detective father. In the series Ted's father was referred to as Detective Logan instead of Captain Logan (his title in the film).

Mr. Preston (voiced by Don Lake) — Bill's father. His appearance differs from his film appearance as he is considerably overweight in the series.

Missy (voiced by Vicki Juditz) — Bill's ditzy step-mother who is only a few years older than Bill and Ted.

Bill & Ted's Excellent Adventures has a total of 21 episodes, spread over 2 seasons, that were produced from September 1990 to November 1991.