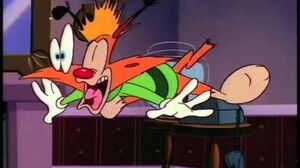 Bonkers is an American animated television series and a spinoff of the earlier Disney series Raw Toonage. The series aired from September 4, 1993 to February 23, 1994 in first-run syndication (after a preview airing on The Disney Channel in early 1993). The syndicated run was available both separately, and as part of The Disney Afternoon. Reruns of the series continued in syndication until 1995. The show was last seen on Toon Disney, but was taken off the schedule in late 2004.

The series follows Bonkers D. Bobcat, an anthropomorphic bobcat who was once a popular cartoon star, but has since washed out of show business and became a cop. He was made the junior partner of Detective Lucky Piquel, a grim and ill-tempered human who hates toons. Throughout the series, the pair work together to solve crimes in the Hollywood, Los Angeles, California region. Bonkers repeatedly tried to win Piquel's praise, but usually just ends up ruining missions with his antics.

After multiple episodes of working with Bonkers, Piquel was given an FBI job in Washington, D.C., and with great glee was finally able to leave Bonkers. At the end of the "Lucky" episodes, Bonkers was given a new partner, the attractive Officer Miranda Wright.

Bonkers D. Bobcat (voiced by Jim Cummings) — Bonkers is an overly energetic and hyperactive anthropomorphic cartoon bobcat that works in the Toon Division of the Hollywood PD. Once a big name cartoon star for Wackytoons Studios, he was fired due to his show being bumped out of first place in the ratings. He was introduced to law enforcement when he unknowingly saved cartoon celebrity Donald Duck from a park mugger (mostly due to the help of officer Lucky Piquel) and was given full credit for the mugger's capture. Though Bonkers means well, he usually messes up cases for his fellow officers due to his lack of experience in law enforcement and his wild, exaggerated, cartoony nature.

In the 'Miranda' episodes, he is portrayed as a rather clumsy, somewhat foolish character who ends up being the show's punching bag. In the Lucky episodes, he's less of a buffoon and more of an Inspector Clouseau-type, in control of himself (though still hyperactive), and carries an extensive knowledge about the toons and their behavior, which is an asset on cases dealing with rogue toons.

Detective Lucky Piquel (voiced by Jim Cummings) — Lucky is Bonkers' partner from the "Lucky Episodes". He is a slovenly, morbidly obese, street-wise, mustachioed man. He is balding, but wears a toupée. Lucky is a serious, hard-boiled detective whose by-the-book nature is at odds with Bonkers' decidedly more maniacal approach to crime solving. Chief Kanifky usually mistakes his last name for Pickle. In the first several episodes in which he appeared, he defeated the villain by falling on them or otherwise crushing them beneath his massive girth. He is the father of Marilyn and husband to Dilandra, whom he normally calls "Dil." It was revealed in "Once In A Blue Toon" that his middle name is Shirley, and that he has a 53 inch waistline. He drives a rather torn-down patrol car throughout the series.

Marilyn Piquel (voiced by Sherry Lynn) — Marilyn is Lucky's child genius daughter. She is an aspiring artist as well as script/story writer and has deep connection to toons such as Bonkers, with her favorite toon being TV star Skunky Skunk. She is more than capable of taking care of herself and aids her father in a number of his cases often being the words of wisdom or a source of knowledge to Lucky. Although looking like her mother Dilandra (aside from her big round glasses and freckled face), she also shares her father's hair color.

Dilandra "Dil" Piquel (voiced by April Winchell) — Dil is Lucky's understanding wife who supports her husband and at times encourages their daughter Marilyn.

Miranda Wright (voiced by Karla DeVito) — Miranda is a fellow police officer from the Hollywood PD. She becomes Bonkers' partner after Lucky joins the FBI.

In the Raw Toonage shorts featuring the titular character, Bonkers was orange with one brown spot, golf-club-like ears, and an undone tail. When the Lucky Piquel episodes (produced by Robert Taylor) were produced, the character was given a major overhaul: skinnier ears, two black spots on each of his tufts, black Tigger-like stripes on his tail, and a different uniform. The Miranda Wright-era episodes (produced by Duane Capizzi & Robert Hathcock) use Bonkers's original look from Raw Toonage. The series also occasionally featured episodes of "cartoons" from Bonkers's pre-police actor days, all lifted from the Raw Toonage series.

While the Bonkers series was in pre-production, the Raw Toonage team, headed by Larry Latham produced 12 "He's Bonkers" shorts. These shorts were, in the context of Bonkers, explained to be some of the shorts Bonkers made at Wackytoons Studios before he was fired. The animated short entitled "Petal to the Metal" was originally shown in theaters in 1992 before the feature movie 3 Ninjas,[1] while the rest were shown on the program Raw Toonage. In syndication, the shorts were collected into four full episodes with fillers of new material in between.

Meanwhile, Duane Capizzi, making his producing debut, was brought into the fold and teamed with animation veteran Robert Hathcock and charged with making 65 episodes (a full season's worth in syndication). The episodes theoretically would feature Bonkers with Wright as his partner. These episodes came back from overseas animation studios looking less than spectacular, causing considerable concern at Disney. Ultimately, the original team was replaced, and a team headed by Robert Taylor came in. Only 19 of the original-order shows survived to air; they are what is known as the "Miranda Wright episodes" of Bonkers. Nine of these episodes were aired on The Disney Channel during the first half of 1993 as a preview for the series, before its syndicated premiere in the fall.

Taylor threw out the old premise of the show and replaced it with the Lucky Piquel scenario, but his episodes were revised and established to occur before the original Miranda episodes. 42 episodes of the "Piquel Era" were made, including one (New Partners On The Block), which attempted to bridge the gap between the two somewhat contradictory storylines.

The syndicated version of the series (which omits several of the original episodes that survived first-run) was last seen on Toon Disney in 2004.

Bonkers has a total of 65 episodes spread over 4 seasons that were produced from September 1993 to February 1994.