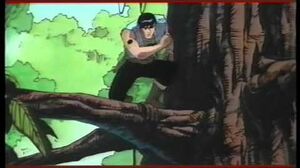 Cadillacs and Dinosaurs is an American animated series which aired on the CBS Kids block on CBS in the United States from 1993 to 1994. The series is based on the comic book of the same name (formerly titled Xenozoic Tales) by Mark Schultz, the series was created by screenwriter Steven E. de Souza, who acquired the TV rights after producing the video game Cadillacs and Dinosaurs, which was also based on Schultz's comic.[1][2] The series dealt with many strong ecologicial and political issues that were central to the plot development.

Cadillacs and Dinosaurs takes place in a post-apocalyptic 26th century. Dinosaurs have reclaimed the Earth, and mankind is struggling to regain a toehold on the world it once ruled. With much of man's technological knowledge lost, people are forced to relearn as much of the old ways as they can. Mechanics are among the most revered of the tribes because of their understanding of machinery, and Jack Tenrec is among the most respected of the Mechanics.

Aided by scientist/diplomat Hannah Dundee from nearby Wassoon as well as fellow Mechanics Mustapha and Kirgo, Jack strives to use the teachings of the mysterious Grith to preserve the "machinato vitae" - the "machinery of life" - by convincing the expansion-hungry humans that they have to work with nature, not against it. With obstacles like Wilhelmina Scharnhorst, the governor of the City by the Sea, and the Terhune brothers, who head a band of poachers, Tenrec and his allies have their work cut out for them.

Jack Tenrec (voiced by David Keeley) — A survival-savvy mechanic with a passion for restoring classic car shells (mainly those of Cadillacs). Jack's main goal in life is to make sure humanity treats the environment and its occupants with respect, which results in plenty of run-ins with violent poachers, corrupt politicians, mad scientists and, on occasion, killer robots.

Hannah Dundee (voiced by Susan Roman) — A foreign ambassador and self-proclaimed scientist from Wasoon. She effectively serves as Jack's partner, supplying a level-headed opinion to his often outlandish ideas. She and Jack have some degree of respect and/or affection for each other, but often they're too busy being snarky for it to go anywhere.

Virgo (voiced by David Fox) — Virgo serves as the City in the Sea's ferryman, stocking the city with fresh water and transporting folk to the mainland and back. He also helps Jack in his adventures.

Hermes — A juvenile "Cutter" (Allosaurus) that was raised by Jack. Although he is gentle towards Jack and his comrades, Hermes can still be rather fierce when angered.

Cadillacs and Dinosaurs has a total of 13 episodes spread over 1 season that were produced from September 1993 to January 1994.