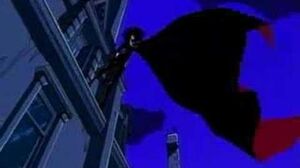 Cybersix is a Japanese/Canadian animated series, based on the Argentinian comic book series of the same name by Carlos Meglia and Carlos Trillo. The series was produced in Canada by NOA and animated in Japan by TMS Entertainment. Many of the comic's darker themes had to be toned down for this series in order to make it appropriate for younger viewers. However, many critics still believed the show was too mature for its target audience.[1]The series originally aired on Teletoon in Canada, Fox in the United States, Kids Station in Japan, and Telefe in Argentina.

Cybersix is a beautiful genetically-engineered creature created by the evil Doctor Von Reichter. After he had massacred the Cyber Series she remains on the run from him in search of her true identity and freedom. However Von Reichter, whose ambition is to rule the entire world with terror, considers Cybersix a failed experiment that must be exterminated. He creates monsters to obliterate anything that gets in his way. To escape Cybersix disguises herself as Adrian Seidelman during the day, a male literature teacher. And by night when darkness covers the serene city of Meridiana, Cybersix finds herself forced to fight against her own kind. To live as a human being and to love as a woman are her only two desires and she will fight to save the humans she loves from her vicious oppressor.

Cybersix (voiced by Cathy Weseluck) — By day she disguises herself as Adrian Seidelman, a literature teacher at Meridiana High School. By night she leaps on the rooftops of the city fighting the monsters Von Reichter sends to destroy her.

Lucas Amato (voiced by Michael Dobson) — A biology teacher at Meridiana High School. He is good friends with Adrian Seidelman, a fellow teacher, and is initially unaware of his double life as Cybersix. After discovering her true identity, Lucas comes to love Cybersix as much more than a friend as the series progresses. He is always there to help her whenever she comes to see him at his apartment.

Julian (voiced by Andrew Francis) — A young street kid and possibly orphan. He is forced to pick pocket against his will until Cybersix promises to take him somewhere safer. He tries to help Cybersix during her fights, but is often rescued by her instead.

Data 7 — Cyber 29 was part of the Cyber Series created by Dr. Von Reichter and the once thought deceased brother of Cybersix. However, Von Reichter saved his brain for a later use in his Data series. Cyber 29's brain was placed in the body of a black panther and he was renamed Data 7. Data 7's mission was to find and kill Cybersix. While he was on his mission his memories came back to him and remembered that Cybersix was not his enemy but his sister. So, Data 7 rebelled against Von Reichter and joined Cybersix to stop him.

Von Reichter (voiced by Terry Klassen) — A former member of the SS and the Nazi party, he is an expert in genetic engineering. He initially began his work in concentration camps during World War II, implanting cybernetic organs in the bodies of dead prisoners in an attempt to bring them back to life to serve in the Fuhrer's army. He fled to South America after the Nazis fell, where he once again continued his sinister experiments. The doctor dreams of replacing all of humanity with creatures created by him who would all hail him as leader.

José (voiced by Alex Doduk) — The clone and "son" of Von Reichter, created to succeed him in case of death, and is usually the one to carry out Von Reichter's plans, though they almost never work. Despite his child-like appearance (and behavior), José is chronologically an adult, but his father engineered him to have eternal youth to prevent him from growing up to be a potential threat.

Cybersix has a total of 13 episodes, spread over 1 season, that were produced from September 1999 to October 1999.