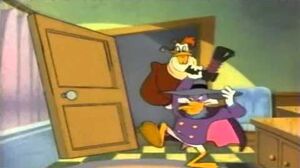 Darkwing Duck is an American animated television series produced by The Walt Disney Company that first ran from 8 September 1991[1] to 5 December 1992[2] and then continued airing in reruns until 1995 on both the syndicated programming block The Disney Afternoon and Saturday mornings on Syndication. It featured the eponymous anthropomorphic duck superhero whose alter ego is mild-mannered Drake Mallard. The series was a spin-off from the Disney series, DuckTales.

Darkwing Duck tells the adventures of the titular superhero, aided by his sidekick and pilot Launchpad McQuack. In his secret identity of Drake Mallard (a parody of Kent Allard, the alter-ego of the Shadow), he lives in an unassuming suburban house with his adopted daughter Gosalyn, next door to the bafflingly dim-witted Muddlefoot family. Darkwing struggles to balance his egotistical craving for fame and attention against his desire to be a good father to Gosalyn and help do good in St. Canard. Most episodes put these two aspects of Darkwing's character in direct conflict, though Darkwing's better nature usually prevails.

Every episode of Darkwing Duck is laden with references to superhero, pulp adventure, or super-spy fiction. Darkwing Duck himself is a satirical character. His costume, gas gun and flashy introductions are all reminiscent of pulp heroes and Golden Age superheroes such as The Shadow, The Sandman, Doc Savage, Batman, The Green Hornet and the Julius Schwartz Flash, as well as The Lone Ranger and Zorro. The fictional city of St. Canard is a direct parody of Gotham City.

Darkwing Duck / Drake Mallard (voiced by Jim Cummings) — Average citizen by day and St. Canard's resident superhero by night. He possesses a mix of courageous altruism and a gigantic arrogance and ego, two drives that constantly clash during his adventures. He's been an active superhero for an unknown number of years. In his earliest days of crime fighting, he was more focused on the headlines from his career, to the extent that in "Darkly Dawns the Duck Part 2" he laments that he has no life outside his showboating and no friends to turn to. Launchpad McQuack and Gosalyn gave him a life and help keep him grounded. His two recurring catchphrases are "I am the terror that flaps in the night", followed by an improvised metaphor before he gives his name, and the battlecry of "let's get dangerous". Because of loose continuity in the show, as well as Darkwing's self-aggrandizing habits, there's more than one origin story for why he became Darkwing Duck - including "Paraducks" (inspired by his own time-travelling adult self), "Crash Reunion" (a random disguise so he could defend his high school prom from Megavolt, and the true origin at least continuity wise), "The Secret Origins of Darkwing Duck" (a Superman parody, which is obviously not meant to be taken as his true origin, it's revealed at the end of the episode that it's just a future Drake spouting out nonsense to make his origin seem cooler due to his ego), and "A Star is Scorned" (which is a "what if" episode and not in continuity.

Launchpad McQuack (voiced by Terry McGovern) — Darkwing Duck's sidekick, originally from DuckTales. He refers to Darkwing as "DW" and Darkwing sometimes refers to him as "LP" in return. He's Darkwing's self-proclaimed biggest fan, even spending a year designing the Thunderquack just out of fanboy urges; the hero originally found him annoying but quickly came to see him as a friend. As GizmoDuck also appears in the show, it's confirmed that Launchpad is no longer working for Scrooge. In the episode "Tiff of the Titans" when Fenton comes to visit Launchpad, he explains to Drake Mallard that "Fenton and I used to work for the same guy".

Gosalyn Mallard (née Waddlemeyer) (voiced by Christine Cavanaugh) — Drake Mallard's 9-year-old adopted daughter. An unstoppable bundle of energy and spunk, which Darkwing has said is more of a handful than fighting evil ("Getting Antsy"). Her grandfather was a famous scientist, murdered by Taurus Bulba. She's an occasional crime fighter - "Yucky Duck", then the "Crimson Quackette", the "Quiverwing Quack", and finally "GosmoDuck" in the BOOM! Studios comics - and often getting involved in Darkwing's affairs as herself. Gosalyn being hurt or worse is one of Darkwing's few fears. This applied to the Negaverse version of Gosalyn too, as he intended to leave the alternate reality until he learned that her guardian was Negaduck.

Darkwing Duck was initially developed as a spin-off of the very successful DuckTales series. Darkwing Duck entered production roughly one year after DuckTales ended. Darkwing Duck was inspired by a specific episode of DuckTales: "Double-O-Duck", starring Launchpad McQuack as a secret agent. Tad Stones was directed to come up with a series around the premise, as an executive liked the title Double-O Duck; Stones was initially reluctant as he felt this would have "no heart or a sense of family" but created a pitch, with GizmoDuck, a character from the final season of DuckTales, as the sidekick (Gizmoduck would end up as a recurring guest star).

The first pitch was rejected but Stones was ordered to try again, and decided this time to take the job more seriously. Taking the idea back to basics, he left the James Bond pastiche idea behind and ended up thinking more of The Shadow and Doc Savage; "suddenly I was engaged and enthusiastic about the idea".[3] Double-O Duck became a separate character to Launchpad (who was kept as the sidekick) and made into an egotist 'man of mystery' and given an array of duck-headed vehicles after Batman and a motorcycle based on Judge Dredd's Lawmaster bike. Gosalyn was introduced in order to "complicate his life" and "play havoc with his ultra smooth and sophisticated self image".

When it turned out that the title "Double-O Duck" could not be used as the Ian Fleming estate owned the 'double-o' title, Disney TV Animation held a competition to come up with a replacement. Alan Burnett, who would soon after leave Disney to work on Batman: The Animated Series, contributed the name "Darkwing Duck". This name would result in a new look (Double-O Duck was to wear a white tuxedo and black domino mask). Other elements of the show, such as Darkwing's habit of coining new catchphrases every time he announced himself, would be invented during production.[4] (As an in-joke, the episode "A Duck by Any Other Name" would have Drake suggest Double-O Duck as a new secret identity and Launchpad remark it "sounds kinda silly".)

Where most prior Disney Afternoon series included at least some characters from classic Disney animation, Darkwing Duck featured a completely original cast. Even the DuckTales characters it reused had no counterpart in early Disney shorts or even the Carl Barks comics. The only exception was the episode "In Like Blunt", which featured cameo appearances by the Beagle Boys, Flintheart Glomgold and Magica De Spell.

The two-part episode "Darkly Dawns the Duck" originally aired as an hour-length TV special on September 6, 1991 as part of a larger TV special, "The Darkwing Duck Premiere and Back to School With the Mickey Mouse Club". The film served as the show's pilot. Seasons 1 and 2 were aired in the Autumn of 1991. Seasons 1 and 3 on syndication as part of The Disney Afternoon block of shows. Seasons 2 and 4 aired on Saturday mornings on ABC. All episodes remained in syndicated reruns on The Disney Afternoon until 1995 and then returned to the line up from 1996 to 1997.

Starting on October 2, 1995, Darkwing Duck was rerun on The Disney Channel as part of a two-hour programming block called "Block Party" which aired on weekdays in the late-afternoon/early-evening and which also included TaleSpin, DuckTales, and Chip 'n Dale Rescue Rangers.[7] On September 3, 1996, Darkwing Duck was dropped from the beginning of the block when Goof Troop was added to the end.[8][9]

The series was last seen in the U.S. on Toon Disney. Along with a number of other shows, it was removed from schedules on November 2004. Toon Disney then aired the Christmas episode "It's a Wonderful Leaf" on December 25, 2004. The show was last seen on January 19, 2007 as part of the Toon Disney Wild Card Stack. Certain episodes from the show's original run rarely re-aired while the show was on Toon Disney. These episodes appear to have been removed for content reasons. The most prominent of the rarely-seen episodes is "Hot Spells", which features a Satan-like character called Beelzebub.

Darkwing Duck has a total of 91 episodes spread over 3 seasons that were produced from September 1991 to December 1992.