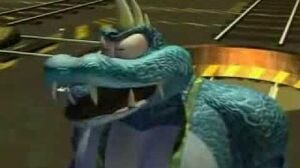 Donkey Kong Country was one of the earliest television series to be entirely computer-animated with motion capture, which matched the artistic style of the video games. The series garnered critical acclaim in France and Japan but only marginal success elsewhere. Several elements of the animated series, such as the crystal coconut, appeared in later Donkey Kong Country video games like Donkey Kong 64, which was released a year after the series began airing on Fox.

Cranky Kong (voiced by Aron Tager) — Donkey Kong's mentor, who often mixes potions. He is able to use the crystal coconut to show up as a hologram whenever he needs to alert Donkey Kong.

Candy Kong (voiced by Joy Tanner) — Donkey Kong's girlfriend. She is much less passive than in the games, and also has a different design.

Funky Kong (voiced by Damon D'Oliveira) — The resident airport manager. He looks as he did in the first game but has tan fur instead of brown.

Dixie Kong (voiced by Louise Vallance) — Diddy's girlfriend, and the only character on the show directly from Donkey Kong Country 2. Like Candy, her design differs from her game appearance (but not as much), and she also has been given tan fur like Funky.

King K. Rool (voiced by Len Carlson (episode 1), Benedict Campbell (rest of series)) — The main villain of the series, who always attempts to steal the crystal coconut and take over the island. His only noticeable change in physical appearance from the game is that his cape is much shorter.

Donkey Kong Country has a total of 40 episodes spread over 2 seasons that aired on Fox and Fox Family from August 1997 to July 2000.