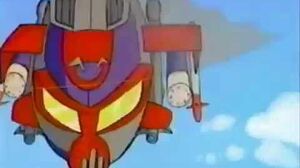 Double Dragon is an animated series based on the video game franchise of the same name. The series was produced by DiC Entertainment and ran for 26 half-hour episodes from 1993 to 1994 in first run syndication. The series notably aired on the USA Network's Action Extreme Team programming block.

The premise of the show had the Lee brothers separated at birth, with Billy being raised by an elderly martial arts master known as the Oldest Dragon. In contrast, his brother Jimmy is raised by the evil Shadow Master to become his second-in-command, the Shadow Boss. As a result, the Lee brothers meet each other as adversaries after being reunited as adults. By the end of the second episode, Jimmy is betrayed by the Shadowmaster , which leads to Jimmy seeing the error of his ways and joining his brother to battle against the Shadowmaster.

The Lee brothers made use of magical swords which contained special powers and added dragon masks to the brothers' outfit. During the course of the series, the brothers recruited allies in their war against the Shadow Master and his henchmen, in the second season gaining stronger magical weapons when the Shadow Master harnessed the strength of the even more evil Shadow Kahn to increase his power. The search for their father, John Lee, was a running subplot throughout the series.

Billy Lee (voiced by Michael Donovan) — Left at the Dragon Dojo by his father John Lee who went to find Billy's twin brother, Billy was raised as a Dragon Master to obey the code. After meeting his brother Jimmy, they decide to join forces and fight together as the Double Dragons. He is noble and only fights when he must. He transforms into a Double Dragon with his brother Jimmy Lee using their swords. He wears a blue outfit regularly, and a red dragon mask when he transforms (and later as the second Shadow Boss). He can transform further using the Dragon Claws, and later acquires a new armor made by Kami, which gives him two swords which can be brought together to form a propeller on his back for flight.

Jimmy Lee (voiced by Scott McNeil) — Raised by the Shadow Master and fooled into believing the Shadow Master to be his father, Jimmy was raised to be the evil Shadow Boss. After being betrayed by the Shadow Master, he joins with Billy and they become the Double Dragons. Jimmy is reckless and always gets in trouble, and he has problems with conformity and often argues with Billy and Marian. He transforms into a Double Dragon with his brother Billy Lee using their swords. He wears a red outfit regularly, and a blue dragon mask when he transforms. He can transform further using the Dragon Claws. He later acquires a new armor made by Kami which gives him a powerful dragon blaster.

Shadowmaster (voiced by Jim Byrnes) — The main antagonist in the series and the leader of the Shadow Warriors, his ultimate goal is to cover the world in darkness and shadow. He has many powers which include shapeshifting and teleporting, and he is able to trap warriors who fail him in the Shadow Mural. He is dark and cruel and has a scythe for a weapon which has a detachable sword for the lower half to be used by the Shadow Boss. As revealed in "The Abyss", he was once the half-brother of Billy and Jimmy's mother until he was consumed by the Black Flames, making him the siblings' uncle.

Double Dragon has a total of 26 episodes spread over 2 seasons that were produced from September 1993 to December 1994.