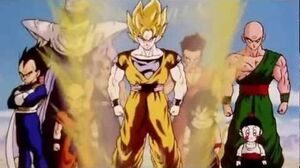 Dragon Ball Z (commonly abbreviated as DBZ) is the long-running sequel to the Japanese anime series Dragon Ball. The series is a close adaptation of the second and far longer portion of the Dragon Ball manga written and drawn by Akira Toriyama. In the United States, the manga's second portion is also titled Dragon Ball Z to prevent confusion for younger readers.

After Dragon Ball Z, the story of Goku and friends continues in the anime-only series Dragon Ball GT, which is not based on a manga by Akira Toriyama.

Dragon Ball Z follows the adventures of the adult Goku who, along with his companions, defends the earth against an assortment of villains ranging from intergalactic space fighters and conquerors, unnaturally powerful androids and near indestructible magical creatures. While the original Dragon Ball anime followed Goku through childhood into adulthood, Dragon Ball Z is a continuation of his adulthood life, but at the same time parallels the maturation of his son, Gohan, as well as characters from Dragon Ball and more. The separation between the series is also significant as the latter series takes on a more dramatic and serious tone. The series also features characters, situations and back-stories not present in the original manga.

Dragon Ball Z was marketed to appeal to a wide range of viewers from all ages, and contains crude humor and an occasional excesses of violence which are commonly seen as inappropriate for younger audiences by American standards. When it was marketed in the US, the distribution company FUNimation Entertainment along with Saban decided to initially focus exclusively on the young children's market, because the anime market was still small compared to the much larger children's cartoon market. This censorship often had unintentionally humorous results, such as changing all references to death, so the dead characters were merely going to "another dimension", and digitally altering two ogres' shirts to read "HFIL" instead of "HELL".

Starting with the Captain Ginyu Saga on Cartoon Network, censorship was reduced due to fewer restrictions on cable programming. FUNimation did the dubbing on their own this time around with their own voice actors. In 2004, FUNimation began to redub the first two sagas of Dragon Ball Z, to remove the problems that were caused from their previous partnership with Saban. They also redubbed the first three movies.

However, the show still retained some level of censorship, not out of FCC laws, but out of choice by Funimation, so as to cater to the possible sensitivity of western audiences. For example, Mr. Satan was renamed Hercule to avoid any religious slurs; his daughter, Videl, was a play on the word Devil, but FUNimation felt that the connection was obscure enough to not worry about.

Filler and Differences from the Manga

Filler is used to pad out the franchise for many reasons; in the case of Dragon Ball Z, more often than not, it was because the anime was running alongside the manga, and there was no way for the anime to run ahead of the manga (since Toriyama was still writing it, at the same time).

The company behind the anime, Toei Animation, would occasionally make up their own side stories to either further explain things, or simply to extend the series. Filler doesn't come only in the form of side stories, though; sometimes it is as simple as adding some extra attacks into a fight. One of the more infamous examples of filler is the Frieza Saga. After Frieza had set the Planet Namek to blow up in five minutes, the final fight with Frieza still lasted well over five episodes, much less five minutes, although this can be attributed to the fact that Namek simply took longer to explode than Frieza expected. Also, there were many numerous filler scenes that took place while the battle with Frieza was in motion, which accounts for much of the footage during the planet's explosion.

As the anime series was forced to expand 12 pages of manga text into 25 minutes of animation footage, these changes were introduced to kill time or to allow the (anime) writers to explore some other aspect of the series' universe. The Other World Tournament between the Cell Games Saga and the Majin Buu Saga, and the Garlic Jr. Saga (Garlic Jr.'s return from the Dragon Ball Z: Dead Zone movie) between the Frieza Saga and Trunks Saga are both good examples of this.

Besides having filler scenes and episodes, there are many changes from the original manga. Among them are the following:

Dragon Ball Z has a total of 291 episodes spread over 9 seasons that were produced from April 1989 to January 1996.

In the U.S., the series initially aired in first-run syndication from September 13, 1996 to May 23, 1998. On August 31, 1998 episodes began airing on Cartoon Network's weekday-afternoon programming block, Toonami, where the series received much more popularity. The first previously syndicated and heavily edited 53 (originally 67) episodes aired in 1998, in 1999 new less edited episodes began to air and the series finished its run in 2003, in the summer of 2005, the first 67 episodes were re-dubbed and shown uncut on Toonami.

It aired in the UK, albeit with the same dubbing problem, on Cartoon Network, premiering on March 6, 2000 and running on that channel until 2002. The Majin Buu Saga, Fusion Saga and Kid Buu Saga were later broadcast on CNX (which later changed its name to "Toonami"), with the show ending on February 28, 2003. After the finished run it was repeated daily, until Toonami merged with Cartoon Network Too.