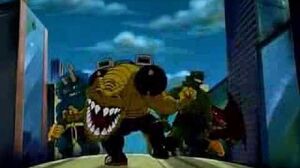 The series stars a tyrannosaurus rex, a triceratops, a stegosaurus, and a pterodactyl that were transformed into super warriors by an interdimensional criminal named Argor Zardok. They rebel against the alien criminal and battle with Argor's second group of warriors known as the evil Raptors. Eventually, the Raptors' objective becomes to cause global warming by increasing the Earth's temperature, which will make life on earth more comfortable for reptiles.

T-Bone (voiced by Scott McNeil) — A tyrannosaurus rex who is the team's leader. T-Bone is attentive to the primary objective even where the others are distracted by personal pleasure. His signature move, that he can perform alone or with any in the group, is the "Saurian Stomp" which shakes the local ground. T-Bone is olive and wears black boots (where one of his claws protrudes through the right boot), dark green pants, and shoulder blades.

Stegz (voiced by Sam Khouth) — A stegosaurus who is the team's technological specialist and the most contemplative of them. He can curl his body into a destructive saw blade, using the plates on his back as its cutting edge. Stegz is green and wears purple shorts and black boots.

Bullzeye (voiced by Jason Gray-Stanford) — A wise-cracking pterodactyl whose chief weapon is a shriek of ear-splitting frequency. Bullzeye is lazy and given to impulse buying. Bullzeye is brown and wears yellow pants, black shoes (which his claws protrude through), and a gold necklace.

Spike (voiced by Cusse Mankuma) — A triceratops with one broken horn. He is a martial arts expert and the team's resident chef. Spike is armed with a hard head that can bust through, apparently, anything. He's smitten with ally Chedra. Despite his eagerness to fight, he tends a garden in his free time. Spike is blue and wears brown shorts, brown leg bands, a yellow belt, and goes about barefoot.

Hard Rock (voiced by Blu Mankuma) — An ankylosaurus from an alternate reality inhabited by humanoid dinosaurs. After helping to thwart the Raptors, Hard Rock moved to Earth where he joined the Extreme Dinosaurs. Of the members of the group, he is the principal pacifist. Hard Rock is grey and wears red pants with grey boots.

Extreme Dinosaurs has a total of 52 episodes spread over 1 season that were produced from September 1997 to December 1997.

In 1996 a spinoff of the Street Sharks toy line, titled Dino Vengers, was created by Mattel that later spawned its own TV series in 1997 with the name Extreme Dinosaurs. These toys featured a group of college teens who turn into Dinosaurs (the plot for the toys is a lot different than the plot of the TV series). The main toys are "T-Bone," "Bullzeye," "Spike," "Stegz," and "Hard Rock." The enemies in the toy line are "Bad Rap," "Haxx," and "Spittor." Later on, the toys expanded into "Dino Vision" toys, which let you see through the dinosaur character (as if you were the dinosaur). There were also War Paint and recolors of the toys.