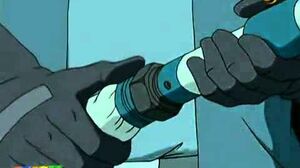 Set years after the end of The Real Ghostbusters, lack of supernatural activity has put the Ghostbusters out of business. Each member has gone their separate way, except for Dr. Egon Spengler, who still lives in the firehouse to monitor the containment unit, take care of Slimer, further his studies and teach a class on the paranormal at a local college. When ghosts start to reappear, Egon is forced to recruit his lone four students as the new Ghostbusters. These are Kylie Griffin, a goth girl genius and expert on the occult; Eduardo Rivera, a cynical Latino slacker; Garrett Miller, a young white paraplegic athlete who uses a wheelchair; and Roland Jackson, a studious African-American machinery whiz. Filling out the cast are Janine Melnitz, the Ghostbusters' previous secretary who returns to the job, and Slimer, a hungry ghost.

The series follows the adventures of this "Next Generation" of Ghostbusters tracking down and capturing ghosts all over New York and occasionally beyond the city. The series is styled as a supernatural comedy, following the trend set by its predecessor, but given an updated and darker feel. This is reflected by the use of a gritty, rock/punk-inspired variation of Ray Parker, Jr.'s song "Ghostbusters" as the opening theme written by Jim Latham and performed by voice actor Jim Cummings. Recurring themes throughout the series are the new team learning to work together despite their differences, Janine's largely unrequited affection for Egon, the love-hate relationship between Kylie and Eduardo that is never resolved, and the Ghostbusters' frequent clashes with authority figures who disbelieve their work.

Egon Spengler (voiced by Maurice LaMarche) — The only original Ghostbuster to become a regular in this spin-off series, Egon takes on the role of mentor for the new team of Ghostbusters. He still lives in the fire house with Slimer, enabling the building to become the Ghostbusters headquarters when paranormal activity starts again. Before the first ghost escaped, Egon was teaching classes on the paranormal at New York City College - with only four people taking his class. He usually leaves the field work to the new members, opting to provide audio back-up from the fire house and information on their current adversary, but has joined them in action when he feels the crisis requires his presence.

Janine Melnitz (voiced by Pat Musick) — The Ghostbusters' original receptionist returns to the role after she is reunited with Egon by taking his Paranormal 101 class at New York City College. Like Egon, she watches over the new team, and on occasion contributes an active part in ghostbusting. According to Egon, she also functions as the team's accountant and collector. She also shows off obvious signs of attraction to Egon, of which he is completely oblivious, which only frustrates her.

Eduardo Rivera (voiced by Rino Romano) — Seemingly a lazy, sarcastic and somewhat clueless character, Eduardo nevertheless makes himself an integral part of the team by being determined and reliable. Eduardo, along with Garret, resembles original Ghostbuster Peter Venkman in that, like Venkman, Eduardo is sarcastic, has a penchant for pursuing attractive women, and is generally unscientific and constantly spouts pop culture references. He also reads "J.N. Kline" young-adult horror novels. Eduardo has a long-running subplot dealing with a love/hate relationship between him and Kylie.

Roland Jackson (voiced by Alfonso Ribeiro) — The mechanic of the group, Roland is the most level-headed and mechanically gifted of the new Ghostbusters, helping Egon repair and improve the Proton Packs and Ecto-1; his reason for joining Egon's class was seeing the Ecto-1 at an auto show. Roland approaches the paranormal from a practical point-of-view, and in the episode "Fear Itself" reveals that his only fear is the dangerous breakdown of his equipment. Roland's strongest wish is to get into the Ivy League and become a doctor.

Garrett Miller (voiced by Jason Marsden) — Despite being a lifelong wheelchair user, Garret has a very 'jock'-like attitude and is a huge fan of extreme sports and attempting mad stunts. In the episode "Grease", it's revealed that Garrett was born with the inability to walk and is studying to be a physical therapist, and throughout the series he only refers to his condition to mock it (and in "Be Careful What You Wish For", uses it as an excuse to dump some work on Eduardo). He is the most headstrong and enthusiastic of the new Ghostbusters, often claiming that he's in it only for the adrenaline rush. While he studies to be a physical therapist to help other disabled people, his secret dream is to be an NBA star.

Kylie Griffin (voiced by Tara Charendoff) — The only member of the new team to have any sort of paranormal knowledge before signing up as a Ghostbuster, after her friend Jack was a victim of the Grundel. Kylie is in awe of Egon when the series began, but this soon shifts to a more equal footing, and becomes somewhat of the unofficial leader in the field, after Egon. Kylie's calm exterior often sets her as a foil against Eduardo's brashness, as part of the ongoing love/hate dynamic between the two. She is also the one who most commonly wields the Ghost Traps. She is depicted as something of a "Goth" girl, judging by the black hair and lipstick. In the episode "Grease", it is revealed that her parents divorced and she currently lives alone with her cat; she was highly close to her grandmother Rose, who died a year before the show started, and both her interest in the paranormal & Gothic styling are implied to be related to her grandmother's death.

Slimer (voiced by Billy West) — Slimer remains the most unchanged of all the characters in terms of personality. However, he is given a less cartoony look to fit in with the series' overall style. Slimer is very well-meaning, but is often pushed around by the Ghostbusters as he gets in their way and eats continually. His actions often affect the story, usually adversely, though he often acts to fix his mistakes and on a number of occasions has been shown to have a heroic nature and that he can wield a proton pack. He's got a strong rivalry with Eduardo, similar to the one he had with Peter Venkman, though several episodes show that Eduardo - and the other Ghostbusters - do care for him as much as he annoys them. He's been living with Egon for over a decade now, and the two are closer than in the original series.

Extreme Ghostbusters has a total of 40 episodes, spread over 1 season, that were produced from September 1997 to December 1997.

The series generated a line of action figures released by Trendmasters. The line included Roland, Eduardo, Kylie, and several ghosts, as well as an updated version of Egon Spengler, and the Ecto-1; Garrett did not have a figure released, although collectors have found a prototype figure. Also released was a role playing Proton Pack and Ghost Trap.