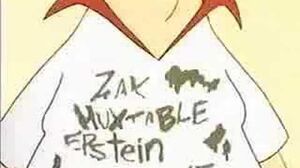 Family Dog is an American animated television series created by Brad Bird, that aired in the summer of 1993 on Syndication. The series was about an average suburban family, the Binsfords, as told through the eyes of their dog. It first appeared as an episode of the TV series Amazing Stories in 1987, then was expanded into a very short-lived series of its own in 1993.[1][2]

The series was part of a string of attempts by major networks to develop prime time animated series to compete with the surprise success of Fox's The Simpsons, alongside Syndication's Capitol Critters and Syndication's own Fish Police.[3] All three series were canceled in their first season.

The series follows the twisted adventures of the Binsford family's dog as told through its own point of view.

The Family Dog (voiced by Danny Mann) — The main character of the series and the Binsford family's pet dog.

Skip Binsford (voiced by Martin Mull) — The father of the Binsford family.

Bev Binsford (voiced by Molly Cheek) — The mother of the Binsford family.

Billy Binsford (voiced by Zak Huxtable Epstein) — The son of the Binsford family.

Buffy Binsford (voiced by Cassie Cole) — The daughter of the Binsford family.

The series was written by Dennis Klein, Sherri Stoner and Paul Dini and animated by Nelvana, but notably lacked the involvement of the original writer and director, Brad Bird. Due to the involvement of Steven Spielberg, the series was very hyped. However, it suffered various noted production delays that ultimately hampered its success. The series did not get past its original network order of 13 episodes. Only 10 episodes were finished and sent back from the Wang Film Productions animation house in Taiwan but the producers were dissatisfied with the results, so they halted production on the final three episodes and outsourced the ten episodes to Nelvana for "fixes and completions."[4]

The series was scheduled to debut on March 20, 1991 (and it was heavily promoted during the February 1991 broadcast of the Grammy Awards), but the animation production wasn't completed in time for this premiere, so the series was ultimately pushed back until 1993.[4][5] Frederick Coffin was originally cast as the voice of Skip Binsford, but Spielberg decided to replace him with Martin Mull, after animation was completed on the first three episodes.

When the show had finally debuted, it was roundly panned for its crude scripts and cheap production values, both of drastically lesser quality than the episode which had spawned the series.[6] [7] Brad Bird did not participate in making the show because he did not believe the show's premise would work as a television show.[8] The entire series was later released as a Laserdisc box-set, and various episodes of the show were released on VHS around the same time. As of January 16, 2011 Universal has yet to announce any plans for a DVD release.

Family Dog has a total of 10 episodes spread over 1 season that were produced from June 1993 to July 1993. 13 episodes were ordered by Syndication but only 10 were completed.