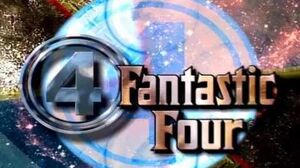 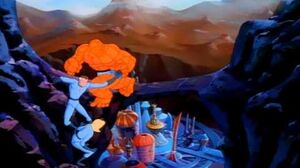 Fantastic Four, also known as Fantastic Four: The Animated Series, is the third animated television series based on Marvel's comic book series of the same name. The series aired for two seasons in first-run syndication as part of The Marvel Action Hour from September 24, 1994 to February 24, 1996, with 13 episodes per season, making 26 episodes in total.

Fantastic Four features a brilliant quartet of amazing superheroes - Mr. Fantastic, the Invisible Woman, the Human Torch and The Thing. These once-normal humans gained superpowers after exposure to cosmic rays during a scientific mission to outer space on a starship test flight gone wrong. Since that pivotal incident, they have devoted themselves to the exploration of the unknown and the preservation of the Earth from destructive, and sometimes alien, forces who confront them at every turn.

In the early-to-mid-1990s, Marvel Productions syndicated the series as part of The Marvel Action Hour. The first half of the hour featured an episode of Iron Man and the second half, an episode of Fantastic Four. During the first season, Stan Lee was featured speaking before each show about characters in the following episode and what had inspired him to create them.

The vast majority of episodes in the first season consisted of fairly accurate re-tellings and re-interpretations of classic 1960s FF comic book stories by Stan Lee and Jack Kirby. For instance, this series stayed true to the original comic book story that recounted the Silver Surfer and Galactus' coming to Earth in a two-part episode as well as Doctor Doom's theft of Surfer's powers. However, the season's cost-effective animation (provided by Wang Film Productions and Kennedy Cartoons) and attempts to add humor through the inclusion of a fussy British landlady (portrayed by Stan Lee's wife Joan) were generally met with displeasure by fans.

Both the Fantastic Four and Iron Man series were radically retooled for the second seasons, sporting new opening sequences, improved animation (as previously mentioned, the animation for the first season was done by Wang Film Productions and Kennedy Cartoons, while the second season's animation was provided by Philippine Animation Studio, Inc.), and more mature writing (the first season was primarily written by Ron Friedman, while the second season was overseen by Tom Tataranowicz), though noticeably having fewer introductions by Stan Lee, with several of the new shorter intros being used more than once. Not only that, Four Freedoms Plaza replaced the Baxter Building as the Fantastic Four's home base in Season 2. The Season 2 episodes also drew upon John Byrne’s 1980s run on the Fantastic Four comic (as well as John Buscema's artwork), in addition to further Lee and Kirby adventures.

The series most recently aired late night on weekends on Disney XD in the United States. Additionally, all 26 episodes can be accessed for streaming on Netflix as the second half of the Iron Man selection.

Fantastic Four has a total of 26 episodes spread over 2 seasons that were produced from September 1994 to February 1996.