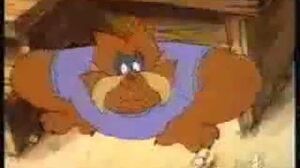 Fievel's American Tails is an American/Canadian animated series, produced by Amblimation, Nelvana, and Universal Cartoon Studios. The series aired for one season in 1992 on Syndication, and continued Fievel's adventures from the 1991 film An American Tail: Fievel Goes West.

Don Bluth, the director of the An American Tail film, had no involvement with the series. Phillip Glasser and Dom DeLuise were the only two actors from the film to reprise their roles, as Fievel and Tiger respectively. However, Cathy Cavadini did reprise her role as Tanya, whom she voiced in the film.

Fievel, along with his mother, his yiddish-speaking father, and sisters Tanya and Yasha, live in the american frontier town of Green River in a mouse-made city under the humans' General Store. Fievel is learning to become a cowboy as he also tries to avoid the wrath and stomach of the shady monocle-wearing Cat R. Waul, who, along with his naive sidekicks Chula the spider and Sweet William, set up shop at the Morton Walton Funerals Building. Fievel had some assistance from Tiger the Cat, his occasionally bashful feline friend, who always kept an eye on the mouse.

Fievel Mousekewitz (voiced by Phillip Glasser) — The main character of the series.

Cat R. Waul (voiced by Gerrit Graham) — The main antagonist of the series.

Fievel's American Tails has a total of 13 episodes contained in 1 season that were produced from September 1992 to December 1992.