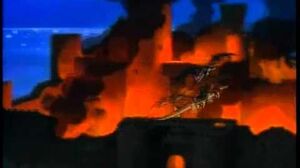 Gargoyles is an American animated series produced by Walt Disney Television Animation and Buena Vista Television, that originally aired from October 24, 1994 to February 15, 1997. It is noted for its relatively dark tone, complex story arcs, and melodrama; character arcs were heavily employed throughout the series, as were Shakespearean themes.

The series features a species of nocturnal creatures known as gargoyles that turn to stone during the day. After spending a thousand years in a petrified state, the gargoyles (who have been transported from medieval Scotland) are reawakened in modern-day New York, and take on roles as the city's secret night-time protectors.

Its video game adaptation and a spin-off comic series were released in 1995. The show's storyline continued from 2006–2009 in a comic book series of the same title produced by Slave Labor Graphics.

The series features a species of nocturnal creatures known as gargoyles that turn to stone during the day, focusing on a clan led by Goliath. In the year 994, the clan lives in a castle in medieval Scotland alongside humans, until many of them are killed by betrayal and the remainder are magically frozen in stone until the castle "rises above the clouds."

A millennium later, in 1994, billionaire David Xanatos purchases the gargoyles' castle and has it reconstructed atop his New York City skyscraper, awakening the six remaining gargoyles. In trying to adjust to their new world, they are aided by a sympathetic NYPD detective, Elisa Maza, and quickly come into conflict with the plotting Xanatos. In addition to dealing with the gargoyles' attempts to adjust to modern New York, the series also incorporated various supernatural threats to their safety and to the world at large.

Goliath (voiced by Keith David) — Goliath is the leader of the Manhattan Clan; named for the Biblical giant by the people of Castle Wyvern because of his stature at 6 ft 10 in (208 cm) and a weight of 400 lbs (181 kg).

Hudson (voiced by Edward Asner) — Hudson was an Elder and former leader of the Wyvern Clan; now advisor to Goliath and the rest of the clan. Hudson is named for the river in New York.

Broadway (voiced by Bill Fagerbakke) — Broadway is overweight and good-natured; named for the street in New York. Broadway has developed a strong dislike of guns and a great appreciation for old movies.

Lexington (voiced by Thom Adcox-Hernandez) — Lexington was the smallest of the clan and a technical wizard; named for the avenue in New York. Lexington harbored bitter hatred against The Pack, but attempted to reconcile with Fox after moving back to the castle.

Brooklyn (voiced by Jeff Bennett) — Brooklyn serves as the clan's second-in-command with a somewhat sarcastic and impetuous attitude but has a talent for tactics. Named for the New York borough. He harbors bitter hatred against Demona after she tricked him. Forty seconds after being whisked away in time by The Phoenix Gate (but 40 years later, from Brooklyn's perspective), Brooklyn was returned to his correct time, older and with a family.

Angela (voiced by Brigitte Bako) — Angela is the naive daughter of Goliath and Demona. She was raised on Avalon and joined the Manhattan clan in the middle of the second season. Angela is so named because of her angelic nature, Angela literally meaning "She-Angel".

Fu-Dog (voiced by Tony Hsieh) — Fu-Dog is a green-skinned leonine gargoyle beast from the Xanadu Clan in China who, at some unspecified time, joins Brooklyn on his journey through the time-stream. He is fiercely loyal to Brooklyn.

Katana — Katana comes from the Ishimura Clan during feudal era Japan, and is Brooklyn's mate, with a similar but smaller beak when compared to her mate. Named for the most famous form of Japanese sword, she joined him on his Timedancer journey. During their adventures, she and Brooklyn had an egg which hatched into Nashville. She has a second egg, Egwardo, which she is very protective of, as shown by her carrying it (before it hatches in 1998) with her everywhere in a little backpack.

Nashville — Nashville is the son of Brooklyn and Katana. He closely resembled Brooklyn, but had Katana's pale blue skin color and bluish-black hair. He is called Gnash for short.

Egwardo — Egwardo is a yet-to-be-hatched gargoyle egg. Its parents were Brooklyn and Katana. Egwardo hatched as a female in 1998, and was given the name "Tachi", possibly named for the predecessor of the sword her mother is named for.

Demona (voiced by Marina Sirtis) — Goliath's former mate and Angela's biological mother; not frozen in stone like the others, she lived through the thousand years because of a magical pact with Macbeth and developed a hatred of all humans, making her an enemy of the clan. She was named by Macbeth, after her demonic fighting skills, Demona literally meaning "She-Demon".

Elisa Maza (voiced by Salli Richardson) — Elisa is an NYPD detective, friend of the Gargoyles, and later love interest for Goliath.

Othello (voiced by Michael Dorn) — Othello was a rookery brother to Goliath who is shown to be hot-headed. Resurrected as the cyborg Coldstone. The Coldstone robot was designed to resemble him. (The name Othello was used to identify the character in the script.) He rejoined the clan in 1997.

Desdemona (voiced by CCH Pounder) — Desdemona is Othello's Mate. She helped to keep Iago at bay, and was eventually transferred into the robot shell of Coldfire. The name Desdemona was used only for script and credit only. She rejoined the clan in 1997.

David Xanatos (voiced by Jonathan Frakes) — Xanatos is a billionaire, nemesis, and later ally of the gargoyles, Xanatos' name is reminiscent of David—the Biblical king who defeated Goliath—and Thanatos from Greek mythology. He broke the spell that imprisoned the gargoyles, and frequently attempted to manipulate or control them.

The series itself bears no "created by" credit. Greg Weisman, a former English teacher, was working as a Disney executive when early versions of Gargoyles were pitched by himself and others. On his blog, he describes himself as "one of the creators" of Gargoyles, and is generally acknowledged by the fan community as the series' originator. However, although Weisman may have co-created Gargoyles, the series' first season was almost entirely written by husband-and-wife team of Michael Reaves and Brynne Chandler Reaves, who wrote 12 of the 13 episodes, with the one remaining episode being written by Steve Perry. Weisman officially joined the series as a co-producer with episode 6, though he also oversaw earlier episodes in his capacity as a Disney executive. Weisman himself did not have any writing credits on the show until the third season—a season which, ironically, Weisman has since disowned.

The second season consisted of 52 episodes, and featured a much larger writing staff, including Reaves, Chandler Reaves and Perry, as well as newcomers Lydia Marano, Cary Bates, Gary Sperling, Adam Gilad, Diane Duane and Peter Morwood, amongst others. For this season, story editing duties were handled on a rotating basis by Reaves, Chandler Reaves, Bates and Sperling. For the third season (consisting of 13 episodes), most of the writing staff was new to the show, although returning writers included Marano, Gilad and Bates.

Many Shakespearean characters and stories found their way into the show's storylines, particularly Macbeth and A Midsummer Night's Dream. The series was also influenced by medieval Scottish history. Weisman also cited the influences of Disney's Adventures of the Gummi Bears and Hill Street Blues on the series. The latter in particular inspired the ensemble format of the series and the 30-second "Previously, on Gargoyles…" recap found at the beginning of later episodes. The former was an influence on the original comedy development of the show, which was subsequently made darker and more serious before production. Some aspects of the series Bonkers, which Weisman also helped develop, also influenced the show to some degree. Most noticeably, the relationship of toon cop Bonkers and his human partner Miranda Wright was used as a template for the relationship of gargoyle Goliath and Elisa Maza, as was the film Beauty and the Beast.

New York artist Joe Tomasini brought a suit against Disney, claiming that his copyrighted screen play and character designs had been copied during the development and production of Gargoyles. The case was ultimately thrown out, after it was proven that Disney did not have access to Joe Tomasini's creations.

A total of 78 half-hour episodes were produced. The first two seasons aired in the Disney Afternoon programming block. The controversial third and final season aired on Disney's One Saturday Morning format on ABC as Gargoyles: The Goliath Chronicles. Greg Weisman, who had been involved with the show from the beginning, wrote the first episode of the third season, "The Journey", but was dissatisfied with the remaining episodes and refused a proposed creative consultant credit on them. Weisman later wrote a Gargoyles comic book series that was a direct sequel to the first and second seasons, ignoring the third season and telling his preferred story in its place.

Gargoyles comics were published in the magazine Disney Studios Adventures, 11 stories in total. A two-part story "Stone Cold" is notable in that it provided a story idea that was later used in the TV series in the episode "The Price". Another story, "The Experts", was intended as tie-in advertising for The Hunchback of Notre Dame.

In 1995, Marvel Comics issued a Gargoyles comic book series which ran for 11 issues. The books did not directly follow the continuity of the series, but they did reference specific events that took place within it. The Marvel series was tonally darker than the television series, dealing largely with Xanatos' experiments to create creatures and machines to defeat the Gargoyles. Greg Weisman, television series co-creator, did not have any direct involvement in the story development of the comic series, but was consulted on some plot points to be sure it stayed within certain boundaries.

Weisman was eventually hired to write for the comic, but Marvel cut the deal with Disney before his run could be produced. Weisman still has his unpublished script for the comic, and would eventually use it as issue #6 of Gargoyles SLG comic. The characters Beth Maza (who appeared in a photo in "Deadly Force") and Petros Xanatos appeared in the comics before their full debut on the show.

On June 21, 2006, Slave Labor Graphics, in association with CreatureComics, began producing a new Gargoyles comic written by Greg Weisman. The comic continues the storyline of the animated series, picking up after the second season finale, "Hunter's Moon, Part III". The first two issues adapt the first episode of The Goliath Chronicles, which Weisman story edited.

In August 2008, Greg Weisman announced that, due to Disney increasing its licensing fees, Slave Labor Graphics would not be renewing its license of Gargoyles after it ran out on August 31, 2008. The final two issues of Bad Guys and four of Gargoyles were released in the comic trades collecting both series in August 2009. Weisman also stated that SLG president Dan Vado has not given up on the Gargoyles franchise and hopes to pursue the idea of Gargoyles graphic novels in the future.