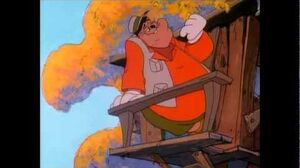 Goof Troop is an animated comedy television series from The Walt Disney Company featuring Goofy as a father figure bonding with his son Max, and Pete, as his neighbor. Created by Peter Montgomery, the first season of 65 episodes ran in first-run syndication from 1992 to 1993 on "The Disney Afternoon", while an additional thirteen episode second season ran on Saturday mornings on Syndication. One Christmas special was also produced, which ran in syndication.

Goofy, a single father, moves back to his hometown of Spoonerville with his 11-year-old son, Max. As it happens, Goofy and Max end up moving in next door to Goofy's high school friend: Pete, a used car salesman and owner of Honest Pete's Used Cars; Pete's wife Peg, a real estate agent; and their two children, 11-year-old son P.J. (Pete Jr.) and 4-year-old daughter Pistol with long red hair. Max and P.J. become best friends and do practically everything together. A large portion of humor comes from the relatively normal Max's personality sharply contrasting with his father.

Goofy (voiced by Bill Farmer) — The single father of Max Goof. He and his son move next door to the Petes from their trailer home in the city. Goofy's biggest weaknesses are his short attention span, scatterbrain tendencies, and clumsiness. He often drives his neighbor Pete up the wall. Goofy is laid back and many times turns the other cheek when Pete insults him (or just doesn't realize he's been insulted).

Max Goof (voiced by Dana Hill) — The son and only child of Goofy. He is around 11 years old, active, nice, alert and friendly, and is in the same grade as his buddy, PJ. He loves his dad, but wishes he would be a little more normal. He wears baggy jeans, gloves, brown shoes, and a red shirt. In the feature film A Goofy Movie, and its direct-to-video sequel, An Extremely Goofy Movie, Max (voiced by Jason Marsden) feels embarrassed by his father's demeanor. Inevitably Max realizes Goofy has his best interest in mind and wants nothing more than to connect with him.

Pete (voiced by Jim Cummings) — A used-car salesman, who lives with his beautiful wife, Peg, and two children, son PJ and daughter Pistol. He is villainous, dishonest, abrasive and obnoxious. They live next door to Goofy and his son, Max. He often exploits his good-hearted yet addled friend, Goofy. His schemes often backfire, or he feels guilty about his oafish behavior and works to set things right. His wife, Peg, often attempts to rid Pete of his uncouth attitude, and his son PJ is a complete opposite of his father in behavior, as he is good friends with Max, in the series and the feature film A Goofy Movie and its direct-to-video sequel, An Extremely Goofy Movie.

Peg Pete (voiced by April Winchell) — Pete's wife and the mother of both PJ and Pistol. In the pilot episode, it is revealed that Peg was a cheerleader in high school where she met Goofy and Pete. Peg works as a real-estate agent in Spoonerville. She wears a pink sweater, tight white pants, black high heels, gold hoop earrings and $90 crimson pumps. When Goofy briefly left Spoonerville, Peg married Pete and settled down. Over the course of the series she is revealed to be cynical and obnoxious at times, especially towards her husband. She often defends Goofy to Pete, even going as far as kissing him to prove a point. It is never revealed why Peg has such a loyalty towards Goofy, but she is very good friends with him and Max.

P.J. Pete (voiced by Rob Paulsen) — The eldest child of Pete and Peg, Pistol's older brother and best friend of Max Goof. He is around 11 to 12 years old, and is in the same grade as his buddy, Max. He is pretty laid-back, and often acts and talks unenthusiastic, except for when he is with his friend Max. He sometimes questions his dad's intelligence, whenever he gets involved in any of his plans or schemes. He wears a blue jacket, a pink turtleneck, white gloves, cerulean pants, and brown shoes.

Pistol Pete (voiced by Nancy Cartwright) — The youngest child of Pete and Peg and P.J.'s younger sister. She has long red hair in two pigtails. She is 4 1/2 years old, and is in preschool. Pistol is a very hyperactive and talkative child, who has a tendency to shoot off her mouth and bounce up and down. She is crazy about wanting to play with everything or always be in her play area, but can be very frank, and wants to get her own way in a lot of things that involve her. She sometimes gets competitive towards her brother PJ and his friend Max. Throughout the series, Pistol gets herself into a few messes, causing either PJ and Max, or even her father to have to bail her out. She wears a white shirt, a black tutu, and black ballet shoes.

Goof Troop was originally previewed on The Disney Channel from April 20, 1992 into July of that year. Like its predecessors DuckTales, Chip 'n Dale Rescue Rangers, TaleSpin and Darkwing Duck and its successor Bonkers, Goof Troop was previewed in syndication (on September 5, 1992) with a pilot TV movie, which later aired as a multi-part serial during the regular run. The series aired on The Disney Afternoon block of syndicated animated series during the 1992/1993 broadcast season; concurrent with the Disney Afternoon shows, another 13 episodes aired on Saturday mornings on ABC in 1992.

Reruns of the series later aired on The Disney Channel (starting on September 3, 1996), and later on sister cable channel Toon Disney. Reruns were shown on Toon Disney until January 2005. The program made a return from September 2006 until August 2008, and the Christmas special still aired on Christmas in the United States.

Goof Troop has a total of 78 episodes spread over 2 seasons that were produced from September 1992 to May 1993. A Christmas special was also produced in 1992, titled "Goof Troop Christmas."

Goof Troop was adapted into the feature film A Goofy Movie (1995) and its direct-to-video sequel, An Extremely Goofy Movie (2000). Both films are spin-offs and take place a few years after the series. The two movies featured Bill Farmer, Rob Paulsen and Jim Cummings reprising their character roles from Goof Troop in these two movies, with Jason Marsden providing the voice of a now-teenager Max.