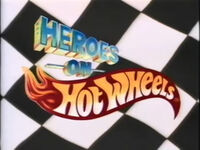 This show was based off a French comic book called Michel Vaillant (here in North America, an "a" was added to the first name) and also the Mattel Hot Wheels toy line.