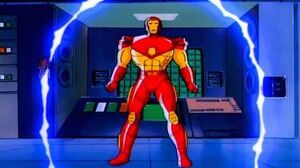 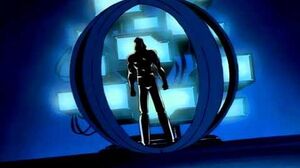 Iron Man, also known as Iron Man: The Animated Series, is an American animated television series based on Marvel Comics' superhero Iron Man. The series aired from 1994 to 1996 in syndication as part of The Marvel Action Hour, which packaged Iron Man with another animated series based on Marvel properties, the Fantastic Four, with one half-hour episode from each series airing back-to-back. The show was backed by a toy line that featured many armor variants.

The series was among the few television series to be re-recorded in THX, which was common at the time for a motion picture, but was rare for a television series. Off the heels of the release of the live-action Iron Man film in 2008, reruns of the animated series began airing on the Jetix block on Toon Disney.

Although only lasting two seasons, Iron Man was the subject of a major overhaul between seasons when its production studio was changed. The result was a massively changed premise, tone, and general approach, which left the disparate seasons scarcely recognizable as being two halves of the same series.

The first season of Iron Man featured little more than a Masters of the Universe-style battle of "good against evil", as billionaire industrialist Tony Stark battled the evil forces of the world-conquering Mandarin as the armored superhero, Iron Man. In his evil endeavors to steal Stark's technology and Iron Man's armor, the Mandarin led a group of villains consisting of Dreadknight, Blizzard, Blacklash, Grey Gargoyle, Hypnotia, Whirlwind, Living Laser, MODOK, Fin Fang Foom and Justin Hammer. To combat these villains, Iron Man had the help of his own team (based on Force Works, a then-current comic book team which has since faded into obscurity), including Century, War Machine, Scarlet Witch, Hawkeye (replacing U.S. Agent from the comics) and Spider Woman.

The season consisted mostly of single-episode open-and-shut-case adventures, with two two-part stories late towards the end. Unlike many other Marvel animated series, despite featuring over-the-top titles that paid homage to the early Stan Lee written Marvel comics of the 1960s (for example, "The Grim Reaper Wears a Teflon Coat", and "Rejoice, I am Ultimo, Thy Deliverer"), almost none of the episodes were adaptations of comic book stories, consisting instead of original stories penned by Ron Friedman, occasionally collaborated on by Stan Lee himself. The closest the season came to adapting a comic book tale was in the two-part "The Origin of Iron Man", which recounted a (modified and modernized) version of the character's comic book origin just before the season concluded.

In 1995, Marvel switched The Marvel Action Hour to a new animation studio (as previously mentioned, the animation in Season 1 was provided by the Rainbow Animation Group, while the animation in Season 2 was provided by Koko Enterprises), and with it came new writers (Ron Friedman was replaced by Tom Tataranowicz[1] for Season 2) and new music for each sequence, coupled with a new direction for the series. The first season's subtle keyboard theme music for Iron Man (composed by progressive rock artist Keith Emerson) was replaced by an intense electric guitar theme featuring the repeated refrain of "I am Iron Man!", while showing Tony Stark beating red-hot iron plates into shape with a blacksmith's hammer (possibly to mimic the Black Sabbath song "Iron Man"). Tony Stark's longer hair style in the second season was based upon the artist Mark Bright's depiction of Stark from the late 1980s, which is where most of the episodes from Season 2 were based upon.

The new story lines spanned multiple episodes and were no longer open and shut cases. They formed a linking narrative, featuring themes of duplicity, consequence, and phobias. Also, the stories were no longer centered on the Mandarin, whose rings had been scattered and whose power had been depleted. While the Mandarin did appear in these episodes, his appearances were reduced to cameos in the cliffhangers at the end of the story, as he tried to retrieve each ring.

Another change was that Force Works was mostly written out of the series, parting ways with Stark after he deceives them in order to work in secret with the Mandarin when Fin Fang Foom and his fellow Dragons were plotting to eliminate earth. When Stark's counter plan against Justin Hammer, which includes faking his death without the knowledge of his teammates, leads to a disbanding of Force Works, Julia Carpenter and James Rhodes are the only ones who continue to work with Stark.

Iron Man has a total of 26 episodes spread over 2 seasons that were produced from September 1994 to February 1996.