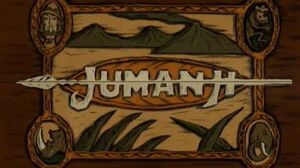 Jumanji is an American animated television series that was inspired by the film based on the short story of the same name. The series ran for three seasons from 1996 to 1999 and was produced by Adelaide Productions, with character designs by Everett Peck. From 1996 to 1997 the series was carried by UPN as part of the UPN Kids block. The series was then acquired by Bohbot Entertainment & Media, Inc. and was aired as part of its syndicated BKN Network block of programming from 1998 to 1999.[1] The series was also shown by CITV in the United Kingdom, TRTÉ in the Republic of Ireland, in Italy on Rai and on Russian RTR channel.

Sister and brother Judy and Peter move to a new house with Aunt Nora. In the attic, they find an unusual board-game, Jumanji. When they play, a rhyming quiz appears, and they're sucked into the bizarre world of Jumanji, where they have to solve the riddle in order to win the game. They meet Alan, who has been trapped there for years, and the three of them get into action-packed scrapes as they try to help Alan escape.

While it followed the film's plot, there were a few changes such as the exclusion of Bonnie Hunt's character Sarah Whittle and the age and relationship of the policeman Carl Bentley (played by David Alan Grier in the film) was changed somewhat. Van Pelt appears in some episodes. Each turn, the player was given a "game clue" and then sucked into the jungle until they solved their clue. Robin Williams' character Alan was stuck in Jumanji because he had never seen his clue. Judy and Peter would help Alan try to leave the game providing the characters' motivation during the series. Also, Peter would sometimes be transformed into various animals whenever he cheated, sometimes using the abilities of whatever animal he becomes to his advantage.

It's also revealed that like Judy and Peter, Alan would never have been able to survive his first day in Jumanji without help, as he possessed poor survival skills at the time. Ironically, his help came in the form of Judy and Peter from the future to him anyway who help him survive and teach him a few of the survival tricks they'd learned from him. In return, the 10-year-old version of Alan helps Judy and Peter return to their time, but later hits his head and forgets meeting them. In the first episode, Alan reveals that there have been other players of the game throughout time, many of whom left their toys in the cave which is part of his home, but not all of them survived the game. In the final episode, using a crystal that shows the past, the kids and Alan find his clue by observing his roll and what the game said, and figure out why he never saw it: right after he rolled his mom called him to dinner and as he was leaving, the clue displayed while he had his back turned and he got sucked in. Once he knew his clue, Alan solved it with Judy and Peter's help and escaped Jumanji. Outside, the kids decide to destroy the Jumanji game now that Alan is free.

Alan Robert John Jason Parrish III (voiced by Bill Fagerbakke) — Judy and Peter's companion in Jumanji. He has been stuck in the game since he was a boy and can only get out if he sees his original clue. According to the Jumanji database, he got trapped in Jumanji on April 3, 1972 (although in "Young Alan," he says its 1965 and in the live-action film it was 1969). In "Young Alan", he was a ten and a half-year-old boy, son of the late owner of a now long shut-down shoe factory and friends with future Officer Bentley. Judy and Peter free him at the end of the show by helping him find and solve his original clue. He tries to get free throughout the series and sometimes succeeds, but always ends up trapped back in the game until he's finally freed by solving his long-lost clue. He was freed from the game by pulling a thorn from a lion's paw, which was ironic since he had encountered the same lion not long after first entering the game. It's revealed that he considers Peter and Judy his family and that his worst fear is that he has no clue and will die an old man, trapped in Jumanji with Peter and Judy spending the rest of their lives trying to free him.

Judith "Judy" Shepherd (voiced by Debi Derryberry) — Peter's older sister. She is smart, and gets teased for it, although her intelligence helps them solve problems. She also has boy troubles as shown in various episodes. She refers to Peter as P Boddy a lot.

Peter Shepherd (voiced by Ashley Johnson) — Judy's younger brother. It's stated in "Eye of the Sea" that Peter is nine years old. He's immature, quite troubled and constantly says "Cool Beans." Although in season 2 and 3, this mostly changes to "Nizer." He constantly cheats and transforms into various animals such as a monkey from the live action film and other jungle animals. He can also speak Manji (presumably Alan taught him) and seems to have somewhat of a friendship with them because he saved their leader; Tribal Bob.

Jumanji has a total of 40 episodes spread over 3 seasons that were produced from September 1996 to March 1999.