King Arthur & the Knights of Justice 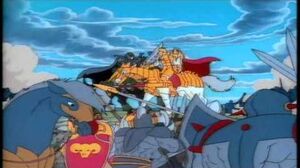 King Arthur and the Knights of the Round Table have been trapped in the Cave of Glass by the evil enchantress Queen Morgana. The wizard Merlin, unable to free King Arthur and the Knights himself, searches the timeline for replacement Knights. Merlin finds the quarterback of the New York Knights football team, Arthur King, as a suitable replacement. Merlin transports Arthur King and his teammates to Camelot after one of their football games and appoints Arthur King as their leader, with his teammates as the new Knights of the Round Table, and assigns them the task of freeing the true King and Knights. To do so, they must find the 12 Keys of Truth, one for each knight that only the knight in question can initially touch. Once all the keys are found, the real knights will be free and the team will return home. In the meantime, they pledge "....fairness to all, to protect the weak and vanquish the evil". The Knights are armed with special armor and are able to summon their respective creatures at any time when in battle armor. These animals, such as King Arthur's dragon, are emblazoned on their shields.

The series had a progressive story with both sides making progress towards their goals. Continuity was also established in the episodes which would be brought up in later episodes, along with some repeat minor characters, character relationships, and previously overcome weaknesses of the Knights. Despite the continual movement towards a resolution, the series was left incomplete as it was canceled after the second season.

King Arthur (Arthur King) (voiced by Andrew Kavadas) — The quarterback of his football team, The Knights, in his own time, Arthur uses his natural leadership skill in battle against Morgana's Warlords. While seeking Merlin's counsel at times, Arthur usually comes up with clever strategies and battle plans when needed. His shield houses the Dragon of Justice (also called the Dragon of the Shield), a wyvern which can be unleashed to do his bidding when he needs it. The dragon was the family crest of the original Arthur of legend, Arthur Pendragon. He stores the great sword Excalibur in his chestplate, rather than a sheath. His horse's name is mentioned once as being Valor.

Sir Lancelot (Lance) (voiced by Scott McNeil) — Lance is the second-in-command of the knights and Arthur's best friend. Fearless and brave, Lance is usually the most serious of the knights. His emblem is a lion. Sir Tone (voiced by Scott McNeil) — Tone is the team's inventor and blacksmith. He invents many machines based on ones he's seen in his own time. Tone's real name is Anthony, and he speaks with an Italian accent. His chest plate houses a hammer and chisel with which he can build almost anything.

Sir Trunk (voiced by Scott McNeil) — The knights' strongman. His shield contains a giant ram strong enough to break down walls and carry several people on its back with ease. Sir Wally (voiced by Lee Jeffrey) — A guard for The Knights football team, as a true knight his job is now to protect Arthur during attacks. Good natured, but takes it hard when he makes mistakes. Sir Brick is his best friend. His shield emblem is a falcon.

Sir Brick (voiced by Garry Chalk) — Like Wally, Brick is usually used as Arthur's bodyguard. He has unwavering loyalty to his friends, including his best friend, Wally. He is able to call an apparently unlimited supply of bricks out of his chest plate and create massive walls from them at will.

Sir Phil (voiced by Garry Chalk) — One of the stronger knights of the twelve. Is very adamant about returning "to the land of cheeseburgers and fries". His chestplate houses a club, and his shield contains a black panther.

Sir Darren (voiced by Michael Donovan) — The only one of the knights with a crossbow, Darren is the team's pretty boy. Now he has found a steady girlfriend in Lady Elaine. He is usually cool and confident on and off the battlefield, perhaps too much so. His shield houses a giant eagle capable of lifting multiple men in each talon.

Sir Gallop (voiced by Mark Hildreth) — The ladies' man, Gallop constantly thinks of women, though is also very respectful towards them. In season 2 he dates the peasant girl called Katherine.

Sir Breeze (voiced by Lee Jeffrey) — Breeze is the big trash talker in the group. He also uses a lot of slang of his time, and is both afraid of heights and small spaces. His emblem is the sphinx. He is a bit of an egotist but knows where his priorities lie.

Sir Lug (voiced by Michael Donovan) — Though originally the team's equipment manager, in Medieval times, Lug is in charge of Camelot's squires. Lug has low self-esteem and is usually picked on by some of the other knights, but he possesses great courage and can even hold his own against Lord Viper in a fight. His shield emblem resembles a kraken.

Sir Zeke (voiced by Mark Hildreth) — A certified brainiac, Zeke is the least seen of the knights.

Merlin (voiced by Jim Byrnes) — The great semi-professional wizard in training who served King Arthur. He was responsible for bringing Arthur and his teammates into the past to fight the Warlords of Queen Morgana after the real King Arthur and his knights were imprisoned. Merlin is a great asset to the knights and uses his various spells, potions and advice to assist them when needed. He is also the only person from his time period to know Arthur and the others' true identities.

Queen Guinevere (voiced by Kathleen Barr) — Camelot's queen and the real King Arthur's wife. Guinevere was captured by Morgana at the show's beginning, but she was rescued by Arthur King (posing as her husband), Lance, and Trunk. She often wonders about the change in Arthur's demeanor and manner of acting, unaware of the whole truth.

Queen Morgana (voiced by Kathleen Barr) — The evil sorceress who serves as the primary antagonist of the series. She was responsible for sealing Arthur and his knights into the Cave of Glass. She despises Merlin and has great magical prowess. While she does not know where they came from, she knows the new Arthur and his set of knights are frauds. Among other things, Morgana constructed the vicious Warlords out of stone. If the Warlords are broken or destroyed in battle, Morgana can reassemble them using her magic.

Lord Viper (voiced by Garry Chalk) — The second-in-command and overall field commander of the Warlords. He seems to be the only human in Lady Morgana's army. Viper has a constant hatred for Arthur King and they have had several sword fights throughout the series. Viper's main weapon is a jagged-edge sword, but he also has a snake emblem on his armor which can attack Viper's opponent. He rides in a cart that doubles as a catapult.

King Arthur & the Knights of Justice has a total of 26 episodes spread over 2 seasons that were produced from September 1992 to December 1993.