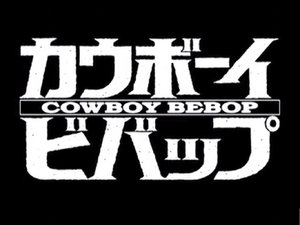 This clip show was created as the final episode when the show was briefly canceled because of violence in Japanese schools after 13 episodes had aired. The episode was never released on DVD.

Cowboy Bebop: Knockin' on Heaven's Door, or Cowboy Bebop: The Movie, is a 2001 animated film directed by Shinichirō Watanabe. The screenplay was written by Keiko Nobumoto, based on the Cowboy Bebop anime series created by Sunrise.

The plot centers on bounty hunter Spike Spiegel and his crewmates aboard the vessel Bebop in their efforts to find a criminal who is planning to release an unknown pathogen on Mars. The title of the movie is taken from the Bob Dylan song of the same name.

The movie was released on Blu-ray disc in Japan on July 25, 2008 featuring remastered 1080p video, and Dolby True HD lossless 5.1 audio. The movie has a run time of 116 minutes.

Retrieved from "https://90scartoons.fandom.com/wiki/List_of_Cowboy_Bebop_Episodes?oldid=5496"
Community content is available under CC-BY-SA unless otherwise noted.