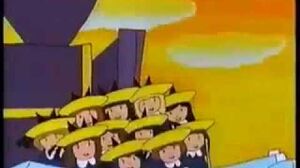 Madeline is a television series produced in 1993 by DIC Entertainment, which aired on the Family Channel. Twenty episodes were produced for the first series.[1] Christopher Plummer reprised his role as narrator from the previous specials[2] and "I'm Madeline" was used as the series' theme song. The series was rerun on the Disney Channel and Toon Disney in the U.S.

In 1995, an additional 14 episodes were produced by DIC for ABC, under the title The New Adventures of Madeline.[1] The episodes featured a new theme song, "Hats Off to Madeline", music by Andy Street with lyrics by Judy Rothman.[3] ABC cancelled the series after seven weeks, meaning six episodes did not air in the U.S. until the series was run on the Disney Channel beginning in 1997.

In 2000, DIC produced 26 episodes for the Disney Channel. The theme song was changed to "Our Madeline" (although overseas screenings had "Hats Off to Madeline" as the opening theme). Christopher Gaze succeeded Christopher Plummer as narrator. The show won a Daytime Emmy Award for Outstanding Children's Animated Program.

Madeline, although the smallest girl in Miss Clavel's boarding school in Paris, nevertheless manages to get herself into one predicament after another, causing her friends and teachers no end of worry. In the end, though, she always comes out all right.

Madeline (voiced by Tracey Lee Smythe (1993-1994), Andrea Libman (1995)) — Madeline is the smallest girl in Miss Clavel's boarding school. She is roughly 6 years old and has red hair. She is shown to have a bit of a mischievous streak which often leads her into trouble. She also has a crush on Pepito.

Miss Clavel (voiced by Louise Vallance) — The headmistress of the boarding school in Paris that houses the 12 little girls. She acts as teacher, caregiver, and role model to the girls.

Pepito (voiced by AJ Bond (1993-1994), David Morse (1995)) — Pepito is roughly 7-8 years old and is the girls' next-door neighbor. When he first appeared in the series, he appeared rude to the girls, and cruel towards animals, But seemed friendly to Miss Clavel. He then became friendly to Madeline and the others after they saved him from a group of dogs. He has a crush on Madeline and is also the son of a spanish ambassador and his wife.

In 1960, the Madeline stories were adapted into a one-hour color episode for the NBC series The Shirley Temple Show. Madeline was played by Gina Gillespie, child actor Michel Petit played Pepito, and Imogene Coca portrayed Miss Clavel. It was Madeline's first appearance on television.

In 1988, DIC Entertainment and Cinar (later Cookie Jar Entertainment, both are now subsidiaries of DHX Media) adapted the first book into an animated television special for HBO.[1] The screenplay was written by Judy Rothman, who was writer, lyricist and story editor for nearly all subsequent Madeline animated projects.[4] The special was narrated by Christopher Plummer,[2] and featured original music and songs by Joe Raposo[5] (who died four months before the special aired),[6] with lyrics by Judy Rothman and Howard Ashman. The special was nominated for an Emmy Award for Best Animated Program (One Hour or Less).[7]

Between 1991 and 1992, Cinar and France animation produced animated adaptations of the other five original books for The Global Television Network and The Family Channel,[1] with Christopher Plummer returning as narrator[2] and Marsha Moreau returning to voice Madeline.[8] Each special featured new songs, with lyrics by Judy Rothman and music by Jeffrey Zahn, who replaced the late Joe Raposo. "I'm Madeline," Madeline's theme song from the original special, was reprised. The specials were released on video by Golden Book Video.

DIC produced the animated telefilm Madeline: Lost in Paris, which was released in 1999, featuring Madeline being drawn into a scam by her supposed "Uncle" Horst and finding the true meaning to the word "family". Andrea Libman voiced Madeline.[9][10]

In 2002, another telefilm, My Fair Madeline aired on Nickelodeon as part of its Sunday Movie Toons series. It is the last original Madeline production to date.

The New Adventures of Madeline was aired on KOL's Secret Slumber Party between Fall 2006 and 2007.[1]

Broadcast and home video rights to all of the DIC/Cinar Madeline episodes/specials/telefilms are owned by DHX Media, as of October 15, 2011.

Madeline has a total of 59 episodes spread over 3 seasons that were produced from September 1993 to March 2001.