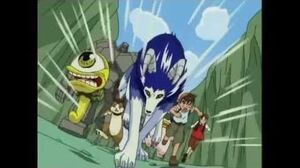 Monster Rancher, known in Japan as Monster Farm, is a Japanese anime series based on Tecmo's Monster Rancher video game franchise. The series originally aired in Japanese on Tokyo Broadcasting Station (TBS) from April 17, 1999 to September 30, 2001. An English adaptation produced by BKN aired on Fox in the United States and YTV in Canada. This adaptation included an English dub produced by Ocean Studios. In Japan, the series existed as two separate seasons; "The Secret of the Stone Disk" for episodes 1-48 and "The Legendary Path" for episodes 49-73.

The story follows a boy named Genki Sakura, who is a keen player of the Monster Rancher video games. After winning a tournament hosted by the game's creators, Genki wins a special CD that he can use to unlock a special monster in his game at home. However, upon using this disk in his game console, he finds himself transported to a world of monsters that, much like Genki's game, are given life by scanning special stone disks within temples. There, he meets a girl named Holly, who is seeking a stone disk containing a legendary Phoenix that will save the land from the tyranny of an evil ruler named Moo. Upon attempting to use the disk Genki had won to try and release the monster, they bring forth a different sort of monster, which Genki names Mocchi. Wanting to free the land from Moo's rule, Genki, Holly, Mocchi and their other monster companions go on a quest to find the stone disk that contains the Phoenix.

Genki (voiced by Chisa Yokoyama (Japanese); Andrew Francis (English)) — Genki is a 12-year old middle school boy, who is the main leader of the group. He has a good heart, and he truly cares for his friends and the monsters. He is very good at the game Monster Battle. After getting the Monster Rancher video game in the mail, he was transported to the Monster World. His goal is to turn all of the evil monsters into good monsters again. Genki also directly fights enemy monsters by donning his roller blades in combat (his roller blades arrived in the Monster World with him). He is also surprisingly strong for a 12-year old (he has been shown to be able to lift objects several times his own weight from time to time in the series), although whether this is due to his own innate strength or because he is in the game world (thereby having been subjected to some game mechanic) is not known.

Holly (voiced by Mariko Kouda (Japanese); Maggie Blue O'Hara (English)) — A 14-year old girl who is on a quest to find the location of the ancient Monster called Phoenix. At the beginning of the series she is more sarcastic and witty like her game counterpart, but she becomes more withdrawn and calm as the series progresses. Her village was destroyed in Moo's first attack which was led by Naga. The attack killed Holly's grandfather and everyone else in the village, leaving only her and her monster Suezo alive. Holly uses a magical pendant called the Magic Stone to locate new Mystery Disks that contain monsters. Though she denies it at first, she learned that her father had become a vessel for the soul of the evil Moo. After the Phoenix and Moo destroyed each other, Holly went on a quest to find the Phoenix's Mystery Disc to save her father from it. Unlike the others, she does not directly involve herself in combat, though she is capable of defending herself.

Mocchi (voiced by Yuri Shiratori (Japanese); Janyse Jaud (English)) — A little pink, duck-like monster who is Genki's tag team partner in many battles. Mocchi came into existence when Genki went to the shrine and unlocked his video game disk which turned out to be a Mystery Disk. Although Mocchi's initial actions indicated that he was a very young child, he soon became a great fighter and a valuable asset in the search for the Phoenix. Like Genki, Mocchi is very brave and good-hearted. When in battle, Mocchi can move very fast by rolling into a ball like an armadillo and bouncing. He can also unleash very powerful attacks, like Cherry Blossom Blizzard and Mocchi Cannon. At first, he can only say Mocchi like his Pokémon counterparts but eventually learns to speak although he still says Mocchi at the end of his sentence/speech.

Suezo (voiced by Wataru Takagi (Japanese); Scott McNeil (English)) — A simple monster with only a mouth, a huge singular eye, and an upright tail. He is Holly's loyal monster retainer. Suezo serves as a joke in many instances and he can be a little obnoxious and loud-mouthed. He has amazing Telescopic vision and can teleport himself and other objects from one location to another in mere seconds, though it took a bit of practice to perfect this. Thus, he eventually becomes a very useful asset to the team.

Golem (voiced by Naoya Uchida (Japanese); Richard Newman (English)) — A large and powerful humanoid monster made of rocks. He moves slowly, but his punches and other attacks are destructive. Golem is a kind-hearted monster who loves nature. However, when in battle he will fight furiously with powerful techniques. He can break apart to perform his Tornado attack, launching bits and pieces of himself in a whirlwind formation. Because he cannot swim, he is also afraid of water. Despite being the single most powerful member of the group, he is passive and would only resort to violence when the group is desperate or if Holly would be hurt.

Tiger (voiced by Kazuki Yao (Japanese); Brian Drummond (English)) — A blue wolf-like monster with horns on his head. He is a feared thief and bandit known as "Tiger of the Wind." He was the leader of a pack of rogue mixed-breed Tigers that were isolated from all humans. Eventually, he met up with Genki. At first, he looked down upon Genki's optimistic and caring nature. Tiger had a rough past that changed him forever, giving him a jaded and cold view of life. However, after listening to Genki, he has learned to care more for others. A clan of Dinos commanded by Moo killed off Tiger's pack, so he joined up with Genki's team in hopes of finding and defeating Moo. Tiger is extremely fast and powerful in battle. He uses an array of swift attacks, as well as firing electricity from his horns and using ice-based attacks. Tiger once had a younger brother named Gray Wolf. They lived together as orphaned pups. Eventually, they built a pack of mixed-breed Tigers. When Tiger first met Moo, the giant monster killed every last member of Tiger's pack and kidnapped Gray Wolf leaving Tiger to die. Tiger would later find out the cold, harsh truth of what happened to his brother.

Hare (voiced by Nozomu Sasaki (Japanese); Samuel Vincent (English)) — A charismatic humanoid rabbit with large fists, Hare acts as the strategist of the group, and can be very cunning and devious when the situation demands it. When first introduced into the series, he was portrayed as a sneaky con-artist. Using the guise of wanting to help the searchers, Hare tried to steal the gang's valuables. Tiger did not initially trust him, but after Tiger forgave him, he joined the team. While friendly towards others, Hare tends to be selfish and often gloats about his skills, but often prefers to flee from battle with more powerful opponents. His fighting style revolves around boxing, flying kicks and flatulence. He is also known to use dirty tricks to get his opponent to drop their guard.

Pixie (voiced by Kotono Mitsuishi (Japanese); Janyse Jaud (English)) — Formerly one of Moo's Big Bad Four, Pixie left Moo after Genki opened her eyes to the truth of Moo's evil. Her overall appearance is that of a slim young woman with red hair, a pair of leathery wings, two silver horns jut from her head, a whip-like tail that ends in a small spike, and clawed hands and feet. Her usual garb is a reddish-pink bikini-like outfit with arm bands and leg bands. Pixie's disposition ranges from quiet and shrewd to level-headed and mature. Her army consists of Evil Hares, Kuros, Usabas, Clays, and Big Blue. Pixie is one of the most physically powerful characters featured on the Monster Rancher series, being the only one to damage Moo in "Holly's Rescue." In addition to seemingly superhuman strength and speed, Pixie can fly and generate massive energy surges and fire walls.

The U.S. version, localized and originally syndicated by Bohbot Entertainment (later BKN), had several parts edited to make it suitable for viewing on American television. Such as the character Hare having his "Gas" attack removed. "Gas" is an attack where Hare turns around and flatulates on his enemy. The flatulence stinks so badly, it stuns enemies, knocks them out, as seen in the episode "Hare's Trick."

Several key episodes of Season 2 were skipped by some networks that aired Monster Rancher in the U.S. "Battle with the Big Bad Four" and "Tiger's Battle with Destiny" only aired once when the series was rerun on Fox Kids. These episode were pivotal battles for Holly and Tiger respectively. By contrast, some of the darker scenes of the anime were not removed nor edited in the dub, such as the villain Naga's suicide, and Tiger being forced to kill his own brother Gray Wolf.

Monster Rancher has a total of 73 episodes, spread over 2 seasons, that were produced from April 1999 to March 2000.