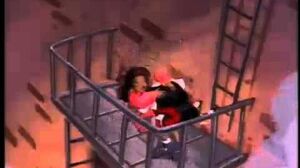 ProStars is an American animated series produced by DiC that aired on Syndication from September 14, 1991 to December 7, 1991. Although ProStars was fairly popular among kids, the series was still cancelled after only one season due to Syndication's decision to discontinue its Saturday morning cartoon lineup.[2]

The series focuses on Michael Jordan, Bo Jackson and Wayne Gretzky as they fight crime, help children, and protect the environment. These three athletes were chosen to represent the pinnacle of all four major American professional sports in the early 1990s. While Jordan and Gretzky are broadly associated with their respective sports, Jackson was included since he could represent both football and baseball and was a high-profile celebrity off the field as well. A reference to his "Bo Knows" Nike ad-campaign was worked into almost every episode.

The three hero athletes were headquartered at "Moms Gym", which was run by the character Mom. The ProStars would receive teleconference messages from various kids around the world, who would explains various situations they were in. The three sporting heroes would then go to wherever the kid was located, and use their gadgets and abilities to stop whatever villains attempting to oppose them. There was often a moral lesson to be taken from each episode.

Although the animated characters are not voiced by their real-life counterparts, the three stars do appear in live-action sequences before every episode, in which they tell kids about the upcoming episode, and often answer questions from kids at the conclusion. Normally this is done solely by Gretzky and Jackson—often in separate sound stages and edited to appear as if talking to each other. Jordan's filmed bits were almost always one line or two, and not part of the skits before the episode.

Michael Jordan (voiced by Dorian Harewood) — He is the leader of the troupe. He is exceptionally smart and talented with complicated contraptions, and he encourages children to study mathematics and the sciences.

Wayne Gretzky (voiced by Townsend Coleman) — He typically plays the role of comic relief. Inexplicably, his mind is always on food.

Bo Jackson (voiced by Dave Fennoy) — He provides the proverbial "muscle" for the heroes. He is immensely strong, and has a bit of a mean streak. His strength often approaches superhuman levels, such as in the series opening, when he uses a gigantic tree trunk like a club against a logging robot.

Mom (voiced by d) — Mom owned Moms Gym, which was the headquarters of the ProStars. She displayed a unique accent, and acted as somewhat of a mother figure to the heroes. Mom often invented quirky gadgets for our heroes to use. The gadgets she created were sports related equipment.

Denise (voiced by d) — Denise is Mom's niece and assistant. She often wanted to help out the ProStars, but ultimately didn't have much of an impact.

The Neighbor (voiced by s) — The Neighbor is a man that lives in the same neighborhood as the ProStars headquarters. Through no fault of his own nor theirs, he was often the victim of the malfunctions that occurred with the equipment the ProStars used.

ProStars has a total of 13 episodes spread over 1 season that were produced from September 1991 to December 1991.