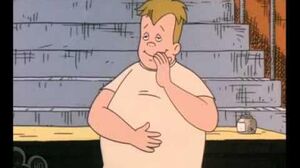 Recess is an American animated series created by Paul Germain and Joe Ansolabehere. The series focuses on six elementary school students and their interaction with other classmates and teachers. During recess, the children form their own society, complete with government and a class structure, set against the backdrop of a regular school. The title refers to the period of time during the school day in which children are not in lessons and are outside in the schoolyard, in North American society.

In 2001, Walt Disney Pictures released a film based on the series, Recess: School's Out. It was followed by a direct-to-video second film entitled Recess Christmas: Miracle on Third Street that same year. In 2003, two more direct-to-video films were released: Recess: Taking the Fifth Grade and Recess: All Growed Down. The characters also made an appearance in a 2005 episode of Disney's Lilo & Stitch: The Series.

Recess portrays the lives of six fourth graders—mischievous prankster and leader of the little "gang" T.J. Detweiler, hot-headed tomboy Ashley Spinelli, popular jock Vince LaSalle, awkward genius Gretchen Grundler, gentle giant Mikey Blumberg, and upbeat yet unlucky military brat Gus Griswald—as they go about their daily lives in a highly clichéd school environment at Third Street Elementary School, where students have set up a microcosm of traditional human society complete with its own government, class system, and set of unwritten laws. They are ruled by a monarch, a sixth grader named King Bob, who has various enforcers to make sure his decrees are carried out. The society has a long list of rigid values and social norms that impose a high expectation of conformity upon the students.

Recess is illustrated to be a symbol of freedom—a time when children can express themselves and develop meaningful relationships. Most episodes involve one or more of the main six characters seeking a rational balance between individuality and social order. They are often defending their freedom against perceived threats by adults and school administration or social norms. The group's leader, T.J. Detweiler, tends to have the most complete vision of this struggle, though even he has times when he inadvertently leads the group too far toward an extreme of conformity or non-conformity, and needs to be drawn back to even ground by his loyal friends.

The show's introductory music, art design and style often evoked the feel of prison escape movies such as The Great Escape, and the playground hierarchy and school administration were often depicted in ways that paid homage to common themes in such films. Additionally, many episodes parody films such as Good Will Hunting, 2001: A Space Odyssey and A Few Good Men.

Theodore Jasper "TJ" Detweiler (voiced by Ross Malinger (1997–1998); Andrew James Lawrence (1998–2001)) — T.J. is the short, ringleader of his five best friends, and usually spends time planning pranks against the teachers (at which he is quite talented). He is rarely seen without his red baseball hat, which he always wears backwards. T.J. has good leadership skills, a talent for public speaking, and in "Good Ol' T.J.", his talent for charming his way out of any situation is revealed. Despite his troublemaking acts, he is very concerned about the well-being of his fellow students and often rallies them and convinces them to work together to stand up for their rights. T.J. is a kind, generous kid who has done incredible things for the sake of his friends.

A defender of the common kid, he seems to have an implied crush on Spinelli, though this is only barely hinted at; in "The Experiment", scientific curiosity causes him and Spinelli to share a first kiss. He created the phrase "this whomps" which he uses as a synonym for something unpleasant (though in "The Story of Whomps", he reveals it to be a word simply made up to stay out of trouble).

Ashley Funicello Spinelli (voiced by Pamela Adlon) — Spinelli is the tomboy of the gang. Although small for her age, Spinelli maintains a tough-guy image, is strong and often tries to use her fists to solve her problems. During the gang's endeavors, Spinelli is the one who gets reluctant kids to talk, usually by threatening or intimidating them. With her reputation, a lot of Spinelli's problems manifest when she is shown to have a weakness, as she prefers to be feared and respected. In the episode "Spinelli's Masterpiece," it is revealed that she has an incredible talent for art, though she claims she "only does it to blow off steam." She also enjoys professional wrestling.

Her aggressive and tough personality has gotten on the good side of Miss Finster as shown in a handful of episodes. She has a rivalry with a group of girls, known as The Ashleys, though ironically she herself is an Ashley. Spinelli has a small crush on T.J.; as her mother mentions in the episode "Parent Night." Spinelli's first kiss is with TJ in the episode "The Experiment."

Vincent Pierre "Vince" LaSalle (voiced by Rickey D'Shon Collins) — Vince is the most athletic student at Third Street Elementary and TJ Detweiler's best friend. Along with his superior athletic ability comes a bit of an ego that has been displayed in "The Bet" and "The Ratings Game." In "I Will Kick No More Forever" he loses confidence in himself and only regains it by kicking a kickball into space. His athletic/competitive skills are far superior to other students, and he seems to excel in most sports and challenges. He has a rivalry with fifth grade smart aleck Erwin Lawson. He has an older brother named Chad who he thinks is the coolest boy he knows, but he is revealed to actually be a nerd in "Big Brother Chad."

Gretchen Priscilla Grundler (voiced by Ashley Johnson) — Gretchen is of British descent and is an academically talented and extremely intelligent student. She is known as the "Smart Girl" on the playground. A child prodigy, she has shown the ability for academic feats that other students in her grade find complicated. She is still a kid at heart and her imagination sometimes gets the better of her, as she is still very naive despite her IQ. She is assisted by an interactive, calculator-sized, hand-held machine called "Galileo." In "Good Ol' T.J." she is shown not to be very good at getting out of trouble, as she is too trustworthy and honest. Though her friends don't share her scientific curiosity, Gretchen considers the gang much more important than finding intellectual colleagues. She also has a unique talent with yo-yo's.

Michael "Mikey" Blumberg (voiced by Jason Davis; singing voice by Robert Goulet) — Mikey is an overweight, mild-mannered, and philosophical 10-year old. He is good at playing goalie in soccer due to his height and weight. He writes poetry, performs ballet, and believes in notions of peace that are often dismissed by the others. Though Mikey is known for being a "sweet-souled giant," there have been times where Mikey is revealed to have a dark side (particularly apparent when others take advantage of him or do not take him seriously). Mikey is the only member of the Gang whose middle name is never revealed.

Mikey discovered that he had a vocal talent that sounded great in the bathroom, but horrible everywhere else. His music teacher in "The Voice," whom Mikey had a crush on, decided to move their practice into the Bathroom. After a few weeks of practice and getting over his fear, Mikey became an astounding singer.

Gustav Patton "Gus" Griswald (voiced by Courtland Robert Mead) — At the beginning of the series, Gus is a new student in Third Street Elementary who is befriended by the gang. He was absent in the first episode "The Break In" because the episode was made before "The New Kid," where he would make his first appearance. Gus is usually naive to the rules of the playground and its traditions. Gus comes from a military family, and therefore had to move around frequently (he has attended 12 schools in six years before he began attending Third Street). He is revealed to be an ace dodgeball player nicknamed "El Diablo," but gave up the game after he made a little boy cry by hitting him in the face with a dodgeball. Gus is learning to play the guitar, and is typically a timid/unpopular boy. However, he has great leadership abilities when they are drawn out of him, and his sense of right and wrong is equal to TJ's in these instances.

Muriel P. Finster (voiced by April Winchell) — Miss Finster is the children's constant nemesis on the playground and the main antagonist (and sometimes anti-hero) of the series. Miss Finster has an archetypal authoritarian teacher personality, and a strong desire for a school in which children are not allowed to have fun or act like children. She is feared by all the children, and is always closely followed by her teacher's pet, the equally nefarious Randall J. Weems, who is also largely disliked by the other students. Nevertheless, Muriel plays a crucial role at keeping the kids of Third Street in line. Despite her old age, Miss Finster is an accomplished boxer and is generally in excellent physical condition.

Despite her cruel behavior, she has shown that there is some good in her, as she does care about her students. Miss Finster is also willing to defend children from harm's way: such as defending TJ from an evil administrator named Dr. Slicer (who turns out to be worse than her).

Principal Peter Prickly (voiced by Dabney Coleman) — Principal Prickly is the principal of Third Street Elementary and is generally a cold authority figure and is the secondary antagonist of the series. However, just like Miss Finster, it is shown that he cares about his charges, showing leniency and kindness on occasion. He has an older brother who he doesn't get along with- Paul Prickly- who crops up from time to time. As a child, he also attended Third Street Elementary, during which time he was referred to as "Petey," a name that is sometimes referenced. His ultimate dream is to be a principal at a middle school - although when offered this opportunity he accepts, but then changes his mind when he sees his replacement, the evil Dr. Slicer, putting the students down.

Randall J. Weems (voiced by Ryan O'Donohue) — Randall is the resident snitch of the playground. He is at the beck and call of Ms. Finster, who rewards him with various confiscated items and candy. He pesters T.J. and the children and seems to enjoy his position on the playground. He is hunched over and almost always seen with a notepad or recording device, waiting to report troublemakers. His job as a playground snitch, however, has made him greatly disliked by the playground. Because of this, the children have gotten wise to Randall's spying tactics, and became able to avoid him, threatening his position as Ms. Finster's spy on some occasions. However, he is shown to exert some sympathy toward others, and has helped out with T.J. and the gang a few times (albeit for his own personal gains).

Recess has a total of 65 episodes spread over 6 seasons that were produced from August 1997 to November 2001. Each half-hour episode contains 2 seperate Recess segments.

Recess: School's Out is an animated film directed by Chuck Sheetz, based on the television series, in which the characters must intercept a gang of anti-recess terrorists plotting to bring about a new ice age to eliminate the institution of recess. The film was produced by Walt Disney Pictures and was released theatrically nationwide on February 16, 2001.

Recess: Taking the Fifth Grade is a Disney direct-to-video animated film released on December 9, 2003 that is considered the series finale.