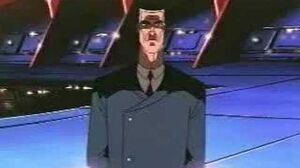 Roswell Conspiracies: Aliens, Myths & Legends was an American animated series produced in an "American anime" style that originally aired in 1999 as part of BKN, the syndicated cartoon programing block. The plot line revolves around the concept that aliens have been on earth a lot longer than we imagined. In fact, we used to call them such things as vampires, werewolves and the other major creatures of myth. The series follows the members of a covert organization formed to seek out and destroy these alien trespassers. Even though it's 50 years after "The Crash," mankind still doesn't know what the alien agenda truly is, but one gets the impression we are about to find out.

The saga of a top secret government agency, the Alliance, and their relentless, clandestine war against hidden alien tribes living on the earth, Roswell Conspiracies carried its story arc across the entire 40 episode series, starting small and gradually growing into an epic, six part finale. On a parallel track, the Series followed the story of bounty hunter and reluctant Alliance agent, Nick Logan, as he struggled to uncover the mystery behind his missing father and ultimately, the deeper conspiracy inside the Alliance— revealed in the last episodic arc.

Nick Logan (voiced by Scott McNeil) — Former bounty hunter now newest Global Alliance Agent and part of the Detection Division. Logan's father, Walter, disappeared during an unexplained alien encounter at Roswell, New Mexico; his grandfather was one of the original members of the Alliance. Nick was raised by his stepfather never knowing at the time that his 'play time' was secret training to fight aliens. Nick is capable of seeing through alien illusions. Nick is a rogue within the Alliance, seldom following procedure and taking many actions upon his own accord. Nick spends most of the series looking for his kidnapped stepfather and searching for information on his real father's disappearance.

Sh'lainn Blaze (voiced by Janyse Jaud) — A rebellious member of the Banshee clan, a race of aliens that landed in the British Isles around 527 BC. She, like her kind, possesses the ability to predict when someone will die. She can also levitate and emit energy streams. She's been targeted by Queen Mab. She becomes a new member of the Alliance and Nick's partner. As the series progresses it is clear that Nick and Sh'lainn develop a relationship. She ultimately forms a psychic bond with Nick when she brings his lost memories to the surface.

James Rinaker (voiced by Alex Zahara) — The head of the Global Alliance and the executive responsible for staging the Roswell Incident. Rinaker is committed to protecting humans from the aliens among them and to preserving the secrecy of the Alliance—at any cost. Throughout the series Rinaker's agenda is to wipe out hostile alien factions and makes alliances with his enemies whenever it involved weakening another foe. This served only to further divide and weaken the alien factions. Toward the end of the series it is revealed that he is actually a Shadoen double agent and sub-commander named Wraith. He killed the real Rinaker in 1946 and absorbed his biological tissue to replicate his DNA. Wraith assumes complete command of the Shadoen Multitude when Keel's ship was misled into underestimating the humans and is hit by a nuclear warhead. Wraith is killed when the Shadoen Multititude is wiped out by the EMP bomb.

Jefferson Trueblood (voiced by Richard Newman) — Sheriff of Roswell. He is the leader of the S.T.A.R. teams and Rinnaker's right-hand man. He is very skillful in combat and in the use of weapons. Trueblood's father was also one of the original members of the Global Alliance. Trueblood became the chief of his tribe following his great uncle's death during a Lycanthrope attempt to eradicate another alien race, the Kachina. He fights honorably and although he normally obeys Rinaker, he will take matters into his hands if he feels Rinaker's orders risk the lives of others. Rinaker's actions ultimately cause Trueblood to distrust the general, and at one point he stole the Lycanthrope EMP bomb from Rinaker and moved it to the vision cave at his native home in Arizona. When Rinaker reveals himself to be Shadoen, Trueblood intercedes when he is about to kill Nick. He sacrifices himself to allow Nick to escape.

Nema Perrera (voiced by Saffron Henderson) — Recruited from Egyptian National Security. She's a weapons specialist who is paired with Fitz in the Detail Unit. Very logical and practical but with enough of a sense of humor to play Fitz's straight man in their friendly snarking.

Simon "Fitz" Fitzpatrick (voiced by Peter Kelamis) — An Ex-CIA agent with a wild imagination and the ability to convince anyone of anything. Fitz's assignment in the Detail Unit is to cover up any and all evidence of alien activity or the existence of the Alliance. Despite a job he's not fully trained for combat, he comes across as easy going and slightly goofy.

In late 1998, Epoch merged for two years with the Bohbot Kids Network (BKN) where Joe Pearson served as the Network’s Creative Director and the Epoch staff served as the heart of the fledgling Network's creative animation team.[1]

While at BKN, Joe and the Epoch team produced the forty episode animated science fiction series—"Roswell Conspiracies: Aliens, Myths and Legends" for American and European TV. Written for an audience of both kids and adults, “Roswell Conspiracies” was originally intended for an hour long broadcast time slot on late Saturday afternoons. When that broadcast opportunity closed, the show was revamped to run in half hour installments in an early morning time slot, but still kept its more mature storyline.[1]

Produced in an edgy “American anime” style, all 40 episodes of Roswell were produced from beginning to end in less then 14 months and boasted very strong production values for a modest budget. This quality level was achieved by using the tried and tested Epoch animation and design team and production system as the core of the pre-production unit at BKN. Elliott Animation in Toronto provided additional design and storyboard services. Brad Rader and Tom Tataranowitz were the principle directors. Dan Faucett, Chuck Patten, George Elliot and Joe Pearson also directed episodes.[1]

Roswell Conspiracies: Aliens, Myths & Legends has a total of 40 episodes spread over 1 season that were produced from August 1999 to June 2000.