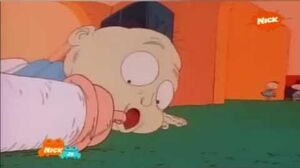 Rugrats is an American animated television series created by Arlene Klasky, Gabor Csupo, and Paul Germain for Nickelodeon. The show focuses on a group of toddlers, most prominently Tommy, Chuckie, Phil, Lil, and Angelica, and their day-to-day lives, usually involving common life experiences that become adventures in the babies' imaginations. Adults in the series are almost always unaware of what the children are up to, providing more room for the babies to explore and discover their surroundings.

The series premiered on August 11, 1991, as the second Nicktoon after Doug and preceding The Ren & Stimpy Show. Production initially halted in 1993 after 65 episodes, with the last one airing on May 22, 1994. From 1995 to 1996, the only new episodes broadcast were "A Rugrats Passover" and "A Rugrats Chanukah", two heavily jewish-themed episodes that both received much critical praise. New Rugrats episodes began airing regularly again in 1997, and The Rugrats Movie, which introduced the character of Tommy's younger brother Dil, was released in 1998. A sequel titled Rugrats in Paris: The Movie came about in 2000, and the infant character Kimi and her mother Kira were added to the series' cast. Rugrats Go Wild, a crossover film with fellow Nicktoon The Wild Thornberrys, was released in 2003 to mixed reviews. The final episode aired on June 8, 2004, bringing the series to a total of 172 episodes and 9 seasons.

On August 11, 2001, Nickelodeon broadcast the made-for-TV special "All Growed Up" in celebration of the series' 10th anniversary. The special acted as a pilot for the Rugrats spinoff series All Grown Up!, which appropriately chronicles the lives of the babies and their parents after aging 10 years. Another spinoff series, Rugrats Pre-School Daze was considered, but only four episodes were produced. Two direct-to-video specials have also been produced under the title Rugrats Tales from the Crib. Tie-in media for the series include video games, comics, toys, and various other merchandise.

Rugrats gained over 20 awards during its 13-year run, including 4 Daytime Emmy Awards, 7 Kids' Choice Awards, and its own star on the Hollywood Walk of Fame. The series garnered high ratings on Nickelodeon and stayed as the network's top rated show for five consecutive years. It was Nickelodeon's longest-running Nicktoon until 2012, when SpongeBob SquarePants aired its 173rd episode.

Rugrats visualizes ordinary, everyday activities through the eyes of a group of toddlers. Using their imaginations, the babies transform routine tasks into surprising adventures. The show plays with baby talk, having the group constantly mispronounce words and use improper grammar. Challenges often emerge because the babies misinterpret the adults, often caused by Angelica's deceptive translations. The grown-ups of Rugrats are simultaneously quirky, over-cautious, and oblivious. The series portrays adults as mysterious eccentrics. Episodes usually center on a moral lesson that the babies learn during their imaginative explorations. Angelica serves as a negative influence on the show but her attempts to mislead the babies are always foiled.

Many of the adventures the babies find themselves in take place at Tommy's house; the parents usually rely on Didi, Stu, or Grandpa Lou to babysit the kids while they run errands. Their address is revealed on an invoice in "Tommy's First Birthday" (season one, 1991) as 1258 N. Highland, the original address of Klasky Csupo in Los Angeles. However, a specific city or state is never mentioned in the show. Several indicators, such as a state flag at a post office, license plate designs on the vehicles, and various trips to the Grand Canyon, Las Vegas, and the beach, place the characters somewhere in southern California. The location is also hinted at during "Little Dude" (season one, 1991) when Didi, who is a teacher, takes Tommy to her class at Eucaipah High School, referencing the city of Yucaipa, California. It has been implied that this ambiguity was done intentionally to help give the impression of seeing the world through the eyes of the babies, who wouldn't understand the concept of location. The DeVilles live next door to the Pickles and early in the series the Carmichaels move in across the street.

Tommy Pickles (voiced by E.G. Daily, and Tami Holbrook in the unseen pilot) — Tommy is the show's protagonist, one-year-old son of Stu and Didi Pickles, and older brother of Dil Pickles. His cousin is Angelica Pickles. He's the leader of the babies, and is dressed in a blue shirt and a diaper throughout the series with the exception of the first episode in which he wears an orange shirt. He is best friends with Chuckie Finster. Tommy is also the bravest and most adventurous of all the babies. He is also willing to do whatever he has to for his friends and family.

Chuckie Finster (voiced by Christine Cavanaugh up to 2002 due to motherly leave, Nancy Cartwright to series' end) — Chuckie is the oldest of the babies at the age of 2 and is Tommy's best friend. He is the son of Charles "Chas" Finster and his late mother Melinda ("Mother's Day"). He has red hair, wears purple glasses like his father, and wears a blue shirt with the planet saturn on it and green cargo pants and red shoes that are always untied. Chuckie was originally an only child and his mother died from an unknown reason just a few months after Chuckie was born. He is the scaredy-cat of the group and always disapproves of an adventure that comes up. Later on, his father remarries Kira and Chuckie becomes an adopted big brother to her daughter, Kimi. His middle name is Crandall as proven in the episode "Chuckie Loses His Glasses" and All Grown Up episode, "Rat Traps".

Phillip "Phil" and Lillian "Lil" DeVille (voiced by Kath Soucie) — Phil and Lil are the twin children of Howard and Betty DeVille. They enjoy doing everything together, whether it be playing in the mud or finding bugs. They are often confused for each other due to their similar appearance, despite the fact that Lil has a long one piece dress over her diaper that matches Phil's shirt over his shorts with a duck on it and has a bow on her hair to tell them apart. They usually call each other by their full first name (Phillip and Lillian) whenever they argue.

Angelica Pickles (voiced by Cheryl Chase) — Angelica is Tommy and Dil's 3-year-old cousin and daughter of Drew and Charlotte Pickles. She is very spoiled by her mother and father and mean to the babies, but will occasionally do something nice for them. She has yellow hair tied in two pigtails with purple bows, a purple dress with a red undershirt and socks with spots. She is able to speak with and understand both the babies and adults.

Susie Carmichael (voiced by Cree Summer) — Another child capable of talking to both the adults and the babies, Susie often serves as Angelica's rival and bullying foil, but the two are actually really close friends. She is kind, compassionate and trusting. She often wears a bright colored jumper and shoes similar to Angelica's outfit. Carmichael is African-American and was added to the series during the second season episode "Meet the Carmichaels". Despite being a major character, she appeared less frequently than the other Rugrats.

Dil Pickles (voiced by Tara Strong) — Dil is Tommy's younger brother. He is unable to speak to the babies, but is able to garble words together. He likes to chew and drool on people and things. He also enjoys hitting Tommy in the head with various objects, most notably his rattle. Dil was introduced in the first Rugrats movie after his birth. At first, Tommy and Dil are extremely jealous of each other, but the two later realize the bond they share as brothers. He is named after his mom's cousin short for Dylan.

Kimi Finster (voiced by Dionne Quan) — Chuckie's stepsister, introduced in the film Rugrats in Paris: The Movie. Kimi, the group's sole asian character, is of japanese descent; she is a very adventurous girl, much like Tommy, and always maintains a positive attitude and a bright smile. She helps Chuckie learn to be a good big brother and often helps him overcome his fears.

Rugrats was formed by the then husband and wife duo of Gabor Csupo and Arlene Klasky, along with Paul Germain in 1989. Klasky Csupo had a major animation firm at the time which also provided services for commercials and music videos. Klasky, Csupo, and Germain were also animating The Simpsons at the time, which they would continue to do until 1992. The trio decided to create their own series in reaction to a proclamation by the children's cable network Nickelodeon that they were to launch their own line of animated shows, which would be later called Nicktoons. With the comedic stimulation branching from the antics of Klasky and Csupo's infant children, the six and a half–minute pilot episode, "Tommy Pickles and the Great White Thing" never to be aired, went into production.

Peter Chung, along with Klasky and Csupo, co-designed the characters and directed the series pilot, "Tommy Pickles and the Great White Thing," as well as the opening sequence. The production was completed in 1990 and they submitted it to Nickelodeon, who tested it with an audience of children. The feedback for the pilot episode was primarily positive. With that, the series went into production.

After the episode "The Trial," Klasky complained that the Rugrats were starting to act too old for their age. Csupo often acted as a mediator in arguments between Klasky and the writers, with the writers often winning. Some of the offscreen tensions ultimately found their way into the scripts and, naturally, into the show. In 1993, shortly before Nickelodeon premiered the last of the original 65 episodes, production of new episodes went on hiatus, and most of the Rugrats writing team left Klasky Csupo. After the first run was over, Nick had enough episodes to show every day, and did just that in 1994, scheduling the show in the early evening, when both kids and parents would be watching. After three years of repeats, the show went back into production.

Production on new episodes restarted in 1997, and the show aired in Nickelodeon's SNICK block from 1997 to 2000. From 1994 until 2012, Rugrats was Nickelodeon's longest-running Nicktoon, with 172 episodes produced across its thirteen-year run. It was surpassed in 2012 by SpongeBob SquarePants when that series aired its 173rd episode that year.

On August 11, 2001, Rugrats celebrated its 10-year anniversary. The special/TV movie, "All Growed Up" was produced for the occasion. After the show, a special retrospective lookback aired, entitled "Rugrats: Still Babies After All These Years." It was narrated by Amanda Bynes. Nickelodeon approved of the special's ratings and popularity so much, they eventually commissioned a full series, All Grown Up, which ran from 2003 to 2008.

Rugrats ended in 2004, along with fellow Nicktoon Hey Arnold!. After the run, two fairy-tale themed direct-to-video films based on the original series under the title, Rugrats: Tales from the Crib were produced and then released separately in 2005 and in 2006.

Rugrats has a total of 172 episodes spread over 9 seasons that were produced from August 1991 to June 2004. During the first six seasons of Rugrats, shows were primarily divided into two eleven-minute segments. After the second film, during season seven, Rugrats made a change with a different format that consisted of three segments per show, though it returned to its original two-episode-per-show format in the final two seasons.

In 1998, The Rugrats Movie was released, which introduced Dil, Tommy's little brother, onto the show. The film grossed $140,894,675 worldwide, making it a very large box office success, considering its modest $24 million budget, though it also received mixed reviews from critics. In 2000, Rugrats in Paris: The Movie, was released, with two new characters introduced, Kimi and Kira. Kimi would become Chuckie's sister and Kira would become his new mother, after marrying his father. It too was a box office success and also received a more positive critical reception. In 2003, Rugrats Go Wild was released. It was a crossover between Rugrats and The Wild Thornberrys. It was the least successful Rugrats film both critically and commercially.