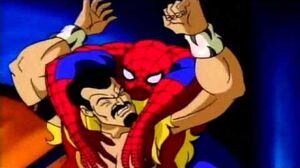 Spider-Man, also known as Spider-Man: The Animated Series, is an American animated television series based on the Marvel Comics superhero, Spider-Man. The show ran on Fox Kids from November 19, 1994 to January 31, 1998. The producer/story editor was John Semper, Jr. and the production company was Marvel Films Animation.[1] The instrumental theme song for the series was performed by Joe Perry of Aerosmith. Starting on May 6, 2014, reruns of the series aired on Disney XD to promote the feature film, The Amazing Spider-Man 2.

The series focuses on Spider-Man and his alter-ego Peter Parker during his college years at Empire State University. As the story begins, Peter has already gained his superpowers and is a part-time freelance photographer for the Daily Bugle. The show features most of Spider-Man's classic villains, including the Kingpin, the Green Goblin, the Lizard, the Scorpion, Doctor Octopus, Mysterio, Shocker, the Rhino, the Vulture, the Chameleon, and Venom. Over the course of the series the single Peter contends with the romantic love interests of Mary Jane Watson, Felicia Hardy and her alter ego, the Black Cat. The show also features appearances from various other Marvel superheroes including the X-Men, the Fantastic Four, Iron Man, Daredevil, Blade, Doctor Strange, the Punisher, and Captain America.

While Marvel's X-Men animated series was being produced by Saban, Spider-Man;; was produced by the newly formed Marvel Films Animation; it was the only series that was produced in-house, but was animated by Tokyo Movie Shinsha with Korean studios.[2] The series is the second longest-running Marvel series ever created, after X-Men, as well as the longest-running series based on Spider-Man. The series was also known for its high level of censorship, with Spider-Man almost never throwing a punch and characters using laser guns instead of real ones.

Spider-Man was one of the most popular TV series on Fox Kids during its run, ranking with the programming block's other hit shows such as X-Men, Power Rangers and Batman: The Animated Series. Its ultimate cancellation after 65 episodes was not due to ratings trouble, but to disagreements between executive producer Avi Arad and network head Margaret Loesch. The series is currently owned and distributed by The Walt Disney Company, which acquired all Fox Kids-related properties from News Corporation and Saban International in 2001.

It has been reported that the animation cels depicting Manhattan's Pan Am Building were scrapped after being complete because the California-based art staff learned the Midtown landmark had been given a new sign more than a year earlier. The animation staff were directed to populate the city with cars and crowds on the street level. Semper believed that was one of the limitations of earlier Spider-Man animated projects.

Originally, Marvel Films planned to make the backgrounds completely CGI while Spider-Man 'webslinged' around New York, yet due to budget constraints were forced to use traditional cel based animation while occasionally using CGI backgrounds. As well, reuse of animation became more common as the series progressed, which also included reuse of animation involving a character speaking (these scenes were sometimes slowed down in order to better match the actor's voice to the animation).

Spider-Man has a total of 65 episodes spread over 5 seasons that were produced from November 1994 to January 1998.