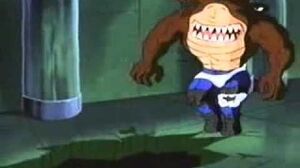 Street Sharks is an American-Canadian animated television series about crime-fighting half-man/half-sharks. It was produced by DIC Entertainment and aired from 1994 to 1995, originally as a part of the Amazin' Adventures lineup. Later, in 1996, the Street Sharks teamed up with the Dino Vengers and was titled, Dino Vengers Featuring Street Sharks. It was created to promote an existing Mattel toy line of the same name. The series was created by David Siegel and Joe Galliani of Mr. Joe's Really Big Productions.

A university professor named Dr. Robert Bolton has invented a gene-manipulation device for peaceful use on animals with his fellow professor Dr. Luther Paradigm. In the first episode, Dr. Paradigm tested his gene-manipulation techniques (which was referred to as "gene-slamming") on a marlin and a lobster which resulted in the creations of Slash and Slobster. Dr. Robert Bolton attempted to destroy Paradigm's research and was transformed into an unseen inhuman monstrosity by the evil scientist using the gene-slamming device on him before escaping. Dr. Paradigm later kidnapped Bolton's four sons John, Bobby, Coop, and Clint to transform them into sharks. After being gene-slammed, their bodies were washed down the river, the four brothers ate a hot dog stand upon their transformation and fled from the police by diving into a lake and burrowing their way into the city by eating the dirt. When Dr. Paradigm captured their friend Bends, the Street Sharks had to save him which ended with Dr. Paradigm accidentally getting gene-slammed with piranha DNA which turned him into Dr. Piranoid. With help from Lena and Bends, the brothers planned to capture Dr. Paradigm so that they could force him to return them to their human selves and expose Dr. Paradigm's genetic experiments.

In subsequent episodes, Dr. Paradigm began to convince the residents of Fission City that the Street Sharks as they became known were vicious, deadly killers who were mutated by their father Dr. Bolton. The brothers teamed up every episode to stop Paradigm and his deadly Seaviates from transforming the citizens of Fission City into mutants with no free will.

One of the characters' favorite catchphrases was "Jawesome," and their favorite food consists of hamburgers, hot dogs, and french fries (though they have been shown to eat things that aren't food). The episode "Sharkbite" revealed that the Street Sharks have a distaste for pizza when Lena lists that food as a suggestion to get them.

The final bunch of episodes involved the Street Sharks meeting the Dino Vengers (a group of alien dinosaurs) and working with them to stop the evil Raptors from taking over the earth.

John "Ripster" Bolton (voiced by Lee Tockar) — John is the leader of the Street Sharks. He is the smartest and the oldest of the Bolton Brothers. He enjoys inventing; taking most of his knowledge and skills from his father. He's also an avid pool player. when he's transformed into Ripster, he becomes a Great White Shark, with teeth that can chew through steel.

Clint "Jab" Bolton (voiced by Matt Hill) — Clint is the lazy brother, and one of his hobbies is boxing. He also appears to have some talent with mechanics. When he transforms into Jab, he becomes a Hammerhead Shark. As such, he uses his head as a battering ram. Jab also appears to be more in tune with his animal side than his siblings, roaring and snarling when angry or excited.

Bobby (Robert) "Streex" Bolton Jr. (voiced by Andrew Rannells) — Bobby is the token "cool" brother, and self proclaimed "ladies man". He is usually seen wearing his rollerblades, and appears to enjoy extreme sports like parachuting and snowboarding. He has also demonstrated the ability to be able to play drums at a professional level. When he transforms into Streex, he becomes a Tiger Shark, taking his name from the purple streaks on his body. In the pilot movie (eventually to be episodes 1-3), he was originally called "Blades", due to his skills as a rollerblader.

Coop "Big Slammu" Bolton (voiced by D. Kevin Williams) — Coop is the sport-oriented brother, and the strongest (as well as youngest) of the four. He was also a football player in high school. When he transforms into Slammu, he becomes a Whale Shark. His most prominently featured attack is called "Seismic Slam", where Slammu sets off an earthquake by hitting the ground with his fists.

Dr. Luther Paradigm (voiced by J. Michael Lee) — Dr. Paradigm is the primary antagonist of the series. A brilliant genetic engineer, Dr. Luther Paradigm plots to turn the whole world into loyal mutates. He was the one that created Slash and Slobster and transformed the Bolton Boys into Shark Mutates. During one such experiment were he was attempting to mutate Bends with piranha DNA, he accidentally crossed himself with the DNA, transforming into Dr. Piranoid as a result. While his mutation did not cause a dramatic increase in mass, he now has webbed hands and feet as well as a more pirahna-like face. His mutation is unstable, as he appears human while calm and collected but will change when under extreme duress.

Street Sharks has a total of 40 episodes spread over 2 seasons that were produced from September 1994 to May 1995. The series premiered as a film that would later become the first 3 episodes.

In 1996, Archie Comics released a short-lived comic book series based on Street Sharks. They published a three-issue mini-series which were based on the first three episodes of the series[1], and a regular comic series, which also lasted three issues.[2]