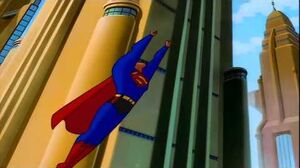 Midway through the series' run, it was combined with Batman: The Animated Series to become The New Batman/Superman Adventures. The characters of Superman and Batman were then spun off into a new animated series, Justice League, which also featured other popular DC Comics characters, including Wonder Woman, Green Lantern, Martian Manhunter, Hawkgirl, and The Flash. Re-runs of the series currently air on The Hub.

The  series focused on the adventures of Superman, an incredibly powerful crime fighter from the planet Krypton, who defends Metropolis from a variety of supercriminals that include Lex Luthor, Brainiac, Metallo, The Parasite, Livewire, The Toyman, Mr. Mxyzptlk, Bizarro, Darkseid, Lobo, Jax-Ur, and Mala. Superman's secret identity is that of Clark Kent, a mild-mannered reporter for the newspaper "The Daily Planet". There he worked with fellow reporter Lois Lane and photographer Jimmy Olsen.

Superman (Clark Kent/Kal-el) (voiced by Tim Daly) — an incredibly powerful alien crime fighter from the planet Krypton, who defends Metropolis from a variety of super-villains. His Kryptonian birth parents sent him off in a spaceship before being destroyed along with their planet, he crash landed in Kansas where he was found and raised by the Kent Family. Superman's Kryptonian body is given special powers by the Earth's yellow sun. Such powers include: heat vision, x-ray vision, super strength, super speed, ability to fly, etc. Superman's only weakness is Kryptonite, glowing green rock fragments,which come from his destroyed home planet Krypton. Superman works at The Daily Planet under the pseudonym Clark Kent.

Lois Lane (voiced by Dana Delany) — Superman's main love interest throughout the series, she works at the Daily planet as a reporter alongside Jimmy Olsen and Superman's alter ego Clark Kent. Superman often saves her when her life is in danger, which it often is.

Lex Luthor (voiced by Clancy Brown) — Luthor is the archenemy of Superman and the most frequent recurring villain in the series. Luthor is a wealthy, power-mad business magnate of high intelligence and incredible technological prowess whose goals typically center on killing Superman, the foremost obstacle to achieving the villain's megalomaniacal goals. Luthor has carefully crafted his public persona however, in order to avoid arrest. He is well known for his philanthropy; donating millions of dollars to Metropolis over the years, funding parks, foundations and medical charities.

In the series, the evil computer Brainiac is not only from Krypton, but is portrayed as responsible for preventing the knowledge of Krypton's imminent destruction from reaching its people so as to save himself, rather than be committed in the presumably futile task of saving the population of the planet. In addition, the ship that carries the infant Kal-El to Earth is designed to have a pilot, and the autopilot used instead was programmed to land smoothly upon reaching its destination. This was done so that the ship is in perfect working condition during Superman's adulthood and could be used as his mode of long range transportation in space. Access to Kryptonian technology and artifacts is initially severely restricted, such as the ship containing a phantom zone projector and Braniac's technology, although Superman later finds a devastated colony in Krypton's solar system with partially salvageable technology, in addition to Kara In-Ze in her functioning cryostasis capsule.

Season two was originally scheduled to run 26 episodes, but it was extended to 28 episodes in order to accommodate a two-part story featuring Supergirl.

While the series features adaptations of much of Superman's rogues gallery, the writers supplemented the supply of enemies by paying tribute to Jack Kirby's Fourth World creations that introduced the villain Darkseid to the series as Superman's archenemy. Darkseid had been portrayed as a villain in Super Friends in the 1980s, but in this series, he was closer to the enormously powerful, evil cosmic emperor originally envisioned by Kirby. Corey Burton's voice performance as Brainiac was done in the same cold, low-affect style as HAL 9000 in the Space Odyssey films, and was also modeled after the 'Control Voice' heard during the opening narration of The Outer Limits.

Superman: The Animated Series has a total of 54 episodes spread over 4 seasons that were produced from September 1996 to February 2000.