Tenko and the Guardians of the Magic 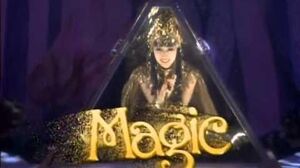 Tenko and the Guardians of the Magic is an American magical girl series produced by Saban Entertainment that centers on the fictional adventures of Japanese real-life magician Princess Tenko. After each episode, she would appear in a live-action segment to perform an illusion or teach a trick, a segment that teaches the audience a simple illusion or magic trick they could perform at home. Unfortunately, the series failed to attract an audience and production was cancelled after a single season, which aired in first-run syndication from 1995-1996.

A young female magician, already an experienced performer, is chosen by an old man named Tenko to come to his school for magicians and learn real magic. At the school, the young magician befriends a number of other magicians already attending the school and learning magic from Tenko. The new magician begins her training and quickly becomes the best magician at the school.

Impressed by her abilities, the master names the young magician "Princess Tenko" in recognition as his successor as the next Tenko and the Master Guardian of the Tenko Box, a magical wardrobe that contains many magic gems known as the Starfire Gems. Two of the most senior students, the twins Jana and Jason, become jealous of the newcomer when she is chosen to become Tenko's successor. The twins conspire and succeed at stealing two of the Starfire Gems for their own use.

When Jana and Jason are discovered, Master Tenko is overcome by their magic. In the scuffle, the Tenko Box is damaged, and the remaining Starfire gems are scattered all over the world and some through time. The twins escape as the new Tenko arrives in an attempt to stop them. Pleased with the young magician's abilities, Master Tenko entrusts Princess Tenko and his remaining students with Starfire Gems he had hidden away and the duty of recovering and protecting the other Starfire Gems from the forces of evil.

Princess Tenko (voiced by Mary Kay Bergman) — The Master Guardian, she is the leader of the show's heroes. She performs a traveling magic show while searching for the displaced Starfire Gems. The ones she personally uses each allow her to summon a ghostly animal companion to help her in battle.

Bolt — Bolt is a caucasian Guardian from Chicago who is the team's joker. His Starfire Gem uses the power to wield a magic sword.

Hawk — Hawk is a Native American Guardian with a somewhat stereotypical connection to nature. His Starfire Gem uses the power to wield a magical shield which can block most other gems' powers.

Steel (voiced by Michael Sorich) — Steel is an African-American Guardian who is a scholar of history. His Starfire Gem uses the power to fire magical rings which he can throw to capture enemies or create ladders.

Ali — Ali is a hot-headed teenage girl who feels distant from everyone in her life. After helping Tenko in one adventure, she becomes her apprentice and trains constantly to be a Guardian. In the second to last episode she does become a Guardian and earns her own Starfire Gem, but we never see what her power is.

Hikita Tenko — The former leader of the Guardians. After he was injured by Jana and Jason he was placed in the Tenko Box and disappeared, but occasionally his spirit appears to Princess Tenko to give her advice.

Shonti — Shonti lives at the Guardians' mansion and is in charge of taking care of their animals, especially Tenko's pet snow leopard cub Ninjara.

Jana — Granddaughter of the Master Guardian who came before Hikita, the short-tempered Jana tried to steal the Starfire Gems when Tenko became the new Master Guardian instead of her.

Jason (voiced by Michael Sorich) — Jana's twin brother. He and Tenko have shown signs of being attracted to each other, but his loyalty to his sister is greater and so he follows her orders.

Travis Cage — An endangered-species poacher who is interested in money with each endangered animal he captures and trades. He finds the diamond Starfire Gem after failing to bag a gorilla. With the help of Jana and Jason, he kidnaps Ninjara, seeing her as a rare prey, and sets traps for Tenko and the Guardians.

Vell — An evil industrialist who was logging a rainforest to try to find the emerald Starfire Gem, which would allow him to free a demonic entity imprisoned long ago in another dimension. He is pulled into the demon's other realm for his failure and his ultimate fate is unknown.

Tenko and the Guardians of the Magic has a total of 13 episodes, contained in 1 season, that were produced from September 1995 to 1996.