The Adventures of Super Mario Bros. 3 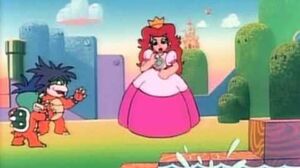 The Adventures of Super Mario Bros. 3 focuses on Mario, Luigi, Toad and Princess Toadstool, who reside in the Mushroom World. Most of the episodes revolve around the four characters' efforts to prevent the attacks made by King Koopa and his seven Koopalings to take over Princess Toadstool's Mushroom Kingdom.

Since the series was based on Super Mario Bros. 3, the enemies and power-ups from the game were heavily featured. In addition to being more faithful to the Mario gameplay, the series was given an established sense of continuity, something that the previous series lacked. However, many episodes were set in "the real world," with "actual" human beings appearing from time to time. Episodes took place in locations such as London, Paris, Venice, New York City, Cape Canaveral, Los Angeles and even Washington, D.C.

The Adventures of Super Mario Bros. 3 has a total of 26 episodes, spread over 1 season, that were produced from September 1990 to December 1990.