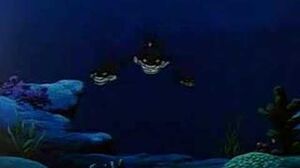 The Little Mermaid is an American animated television series produced by Walt Disney Television Animation based on the film of the same name. It features the adventures of Ariel as a mermaid prior to the events of the film. This series is the first Disney television series to be spun off from a major animated film. Some of the voice actors of the film reprise their roles in the series, among them Pat Carroll as Ursula, Jeff Bennett as Eric, Kenneth Mars as King Triton, Jodi Benson as Ariel, Edan Gross and Bradley Pierce as Flounder and Samuel E. Wright as Sebastian.

The Little Mermaid premiered in the fall of 1992 with the animated prime time special "A Whale of a Tale," then moved to Saturday mornings. This series originally appeared on Syndication with an original run from 1992 to 1994. It was later shown in reruns on The Disney Channel from October 2, 1995 to 2008. Some of the episodes contain musical segments, featuring original songs written for the series. The opening theme song to the show is an instrumental combination of the songs "Part of Your World", "Under the Sea", and "Kiss the Girl".

The Little Mermaid television series is a prequel to the film of the same name. The story is set before the events in the 1989 film, and follows Ariel's adventures as a mermaid still living under the sea with her father, Sebastian the crab and Flounder the fish. Various episodes highlight her relationship with her friends, father and sisters, and usually involves Ariel foiling the attempts of various enemies that intend ill harm to her or her kingdom.

A prequel film to the film, The Little Mermaid: Ariel's Beginning, was released in 2008 containing events that contradict the television series (such as Ariel's youth and first meeting with Flounder), making the TV series and film independent continuities.

Ariel (voiced by Jodi Benson) — She is the youngest daughter of the sea king who loves to sing and go on adventures. She also has developed magic in season 2 (episode 9) to save her world.

Flounder (voiced by Bradley Pierce in season 1, Edan Gross in season 2-3) — Ariel's best friend, a yellow and golden blue colored tropical reef fish who follows along on her adventures, and can be easily scared.

Sebastian (voiced by Samuel E. Wright) — A small red jamaican crab who acts as the king's adviser, court musician, a teacher, a scout leader and a baby sitter-like figure for Ariel.

King Triton (voiced by Kenneth Mars) — He is Ariel's father and ruler of Atlantica who protects his kingdom with his magic trident.

Urchin (voiced by Danny Cooksey) — He is an orphan young merman and Ariel's friend. He shares her love for adventure and is unofficially her adopted brother, and at one point starts to develop romantic feelings for Ariel.

Scuttle (voiced by Maurice LaMarche) — He is a clumsy seagull who is friends with Ariel. He first appears in the episode "Scuttle". At first Ariel is afraid of Scuttle, but they become friends after he helps them rescue Sebastian.

Flotsam and Jetsam (voiced by Paddi Edwards) — Ursula's green moray eel henchmen who do her evil bidding. They have one white eye and one yellow eye.

Eric (voiced by Jeff Bennett) — Ariel's future husband. His first appearance is in the episode "Thingamajigger" and appears occasionally throughout the seasons with his dog, Max. Ariel first sees him saving a dolphin from a net, which technically makes this scene the first time she has ever seen Eric, but does not know who he is.

After the success of the 1989 film, The Walt Disney Company planned to produce a children's television series for its Disney Channel cable outlet called The Little Mermaid's Island. The proposed series would feature puppets from Jim Henson's Creature Shop interacting with a live Ariel. As the video release of The Little Mermaid soared in sales during 1990 and early 1991, Disney quietly dropped plans for The Little Mermaid's Island in favor of a more ambitious plan: an animated weekly series for the CBS network. The new show would concern the adventures of Ariel and her friends before the events in the film.

Jamie Mitchell, an artist and graphic designer who worked on Disney's Adventures of the Gummi Bears, was named the producer and director of the new series. Patsy Cameron and Tedd Anasti were the story editors and wrote almost all of the episodes for the show's second and third seasons. Their previous joint work included Hanna-Barbera's The Smurfs, the animated Beetlejuice and Disney's DuckTales. Some of the artists and technicians on the feature film also contributed to the TV series. Mark Dindal, chief of special animated effects for the movie, was a consultant for special effects on the TV show. Robby Merkin, who worked with Alan Menken and Howard Ashman on arranging the songs for the movie, worked as the arranger and music producer for the first season of the TV show.

Conscious of the worldwide acclaim for the movie's superior artistry, Walt Disney Television Animation auditioned the best overseas animation studios. In the world of TV animation, farming most of the artwork out to Asian studios is an economic reality due to lower production costs and wages abroad. Studios in Korea, Japan and the Philippines contributed to the series.

The show's broadcast debut in September 1992 was in the form of a half-hour prime-time special, "The Little Mermaid: A Whale of a Tale." Interestingly, "Whale of a Tale" is not officially considered an episode of the series by Disney because it was produced under a separate contract from CBS and was not shown again in the U.S. after its one and only broadcast, though it is available on video and laserdisc.

Its Saturday morning debut came the very next day. The show's time slot was 8:30 a.m., following another new animated series based on the film, An American Tail. The Little Mermaid series drew a fair bit of media attention, including more than one spot on Entertainment Tonight, because it was the first series based directly on a Disney animated feature and was a rare television cartoon concerning a female character. The show kept its time slot the following year with its second season.

For the series' third season, the show was moved to the 8 a.m. time period and was the lead-in for a new Disney animated series, Aladdin. This was to be the show's last season in original production as CBS elected not to buy another season of episodes. On October 2, 1995, The Disney Channel began rerunning the show seven days a week. The show was broadcast once a day on The Disney Channel and on the new Toon Disney cable outlet until 2008. The series is currently shown on Disney Junior, it is currently the only pre-2007 WDTA series currently being rerun on any of Disney's three cable outlets.

The Little Mermaid has a total of 31 episodes spread over 3 seasons that were produced from September 1992 to November 1994.