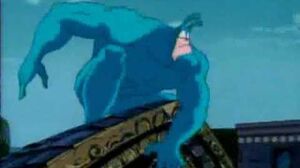 The Tick is an American animated series adaptation of the New England Comics superhero, the Tick. The series debuted September 10, 1994 on the Fox network's Fox Kids block and was responsible for introducing the satirical comic book character to a mainstream audience. Lasting three seasons, the final episode aired on November 24, 1996. Since then, The Tick has been syndicated by various networks, further increasing the show's cult following, and has been released on both VHS and DVD. A live-action series was created in 2001.

After crashing the superhero convention, the blue-clad hero, the Tick, is deemed the protector of the City. On his first mission he runs into Arthur, an accountant with a moth costume who also aspires to become a superhero. They soon strike up a hero partnership to protect The City from a host of nefarious villains such as Chairface Chippendale, El Seed, and many more.

A typical episode plot would have the Tick battling a villain until Arthur devises a solution that saves the day. The Tick then declares an absurd moral regarding the previous conflict before the story comes to a close. Although the series was initially aimed primarily at children, it features an absurdist, parody style that appeals to an older audience as well.

Tick — The Tick's origin was considerably changed from the comic to be more appropriate for children. In an interview, the Tick recalls crashing the National Super Institute in Reno by demonstrating his nigh invulnerability in a dangerous device which explodes, destroying the entire building and leaving the judges astonished. The Tick is then assigned to protect the City. Like in the comics, not much is known about the Tick. He doesn't recall his own past and assumes he has always been a hero stating that he doesn't know much else. The Tick is never seen without his costume on, even when off duty.

Arthur — Arthur was an accountant before he met the Tick and they became a crime-fighting duo. He acts as the Tick's sidekick but usually comes up with the solutions to any problem the duo runs into. Arthur's suit grants him the ability to fly.

While still in college, Tick creator Ben Edlund was producing his independent comic book series based on the character. He was eventually approached by Kiscom, a small, New Jersey-based toy licensing and design company. Kiscom wanted to create successful merchandising off The Tick similar to that experienced by Teenage Mutant Ninja Turtles, a fellow independent comic series, the year prior. However, major TV networks and studios were reluctant to take on an animated series based on the absurd character. Kiscom stayed in touch with Edlund and finally Sunbow Entertainment, a small animation company based out of New York, paired him up with writer Richard Libmann-Smith. The two had virtually no experience in animation or television but for two months worked vigorously on the first episode of The Tick. Neither man held high esteem over their final script, and their feelings were validated when FOX turned down the first pitch. They were given one more chance to refine it within five days. Over the following weekend, the two worked "instinctively" with little sleep and ended up satisfying FOX. Edlund later reflected, "We kind of defined in one weekend exactly where the show went for that first season, which was cool."

While some darker characters and sexual innuendo seen in the comic series would be removed for its animated counterpart, Sunbow's Tick series would hold to its satirical roots. Writing duties were also given to Christopher McCulloch who had met Edlund prior to their television work and wrote several issues of the Tick comic book series. The two would much later work together on McCulloch's Adult Swim series, The Venture Bros.. Edlund, a co-producer of The Tick, remained very hands-on during the production of episodes and delayed the series.

The Tick finally premiered on September 10, 1994 and was met with success. Rather than being an asylum escapee, as portrayed in the Tick comic book series, the animated version of the Tick crashes a superhero convention to win the "protectorship" of the City. With its emphasis on superhero parody, The Tick became a Saturday morning staple during the Fox Kids block. Its title character was voiced by Townsend Coleman and his sidekick, Arthur, by Micky Dolenz for Season 1. Rob Paulsen would take over the Arthur voice role during Seasons 2 and 3. The series also features Die Fledermaus as a shallow, self-absorbed Batman parody; Sewer Urchin, a Rain Man-like version of Aquaman; and American Maid, a more noble superheroine featuring aspects of Wonder Woman and Captain America.

The show's opening theme, written by Doug Katsaros, who also composed the scores for every episode, consists of big band music and campy scat singing.

By November 1996, after three seasons, The Tick had come to an end. The following year, FOX began talks with Sunbow Entertainment about producing a prime time Tick special, but this never came to fruition. Comedy Central syndicated The Tick during this time and subsequently helped make it a cult hit with adults. In May 2000, the pilot episode for a live action series of The Tick was completed. FOX attempted to capitalize on the growing adult fan base by introducing this new incarnation in November 2001, but due to its major time slot, the series couldn't match the success of its animated predecessor.

In June 2005, Toon Disney began airing The Tick along with other former FOX animated series like X-Men. It would also occasionally air on ABC Family as part of the Jetix cartoon block.

The Tick has a total of 36 episodes spread over 3 seasons that were produced from September 1994 to November 1996.