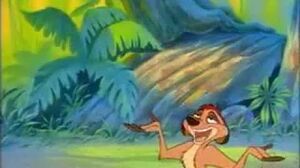 The Lion King's Timon & Pumbaa, often simply referred to as Timon & Pumbaa, is an animated comedy television series made by Walt Disney Television Animation. It centers on Timon the meerkat and Pumbaa the warthog from the Disney film franchise The Lion King, without most of the other characters in the franchise. The show ran for three seasons from September 8, 1995 to September 24, 1999. It is also the first Lion King related media to show humans, as they were not present in the films.

The show stars Timon, a meerkat, and Pumbaa, a warthog, both characters from the Disney animated film The Lion King and its sequels. Set after the events of the original film, the series involves the characters having misadventures in the jungle, as well as across the globe in various settings.

Ernie Sabella and Nathan Lane reprised their roles as Pumbaa and Timon, respectively, in the early episodes of the series. However, after Lane left the role, Timon was played by Quinton Flynn, in some episodes, and Kevin Schon, in all other episodes.

The series premiered on September 8, 1995, airing on Fridays on the syndicated block "The Disney Afternoon". Eight days later, on September 16, the series also began airing on Saturday mornings on Syndication. The show was one of the last Disney productions to air on Syndication, which had a cross-promotion agreement with Disney. Disney would buy Syndication in 1996, the same year that this show and all other Disney properties still airing on Syndication at the time left the network. In 1998, there was a change in writers and a new director, and the show was retooled and became aimed more towards children than the whole family. As a result of this, ratings declined and the show was ultimately canceled. The third season aired on Toon Disney from January 1st, 1999 to September 24th, 1999.

Since February 8, 2009 (after its final airing on the now-defunct Toon Disney), this show went off the air for three years. However, it returned to broadcast reruns on March 23, 2012 on Disney Junior.

Timon & Pumbaa has a total of 85 episodes spread over 3 seasons that were produced from September 1995 to September 1999.