Where on Earth Is Carmen Sandiego? 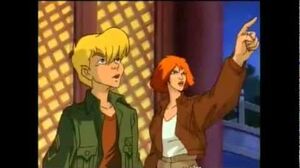 Where on Earth is Carmen Sandiego?, not to be confused with Where in the World is Carmen Sandiego?, is an American animated television series based on the series of computer games. The show was produced by DIC Entertainment/Program Exchange and originally aired Saturday mornings on FOX. Its episodes have subsequently been repeated on the Fox Family, PAX and the short-lived girlzChannel. Reruns of the series currently air on The Worship Network, KidMango, Hub Network, and, since June 8, 2012, on Qubo. The series won an Emmy Award for "Outstanding Animated Children's Program" in 1995, and in the same year was spun off into a Where in the World-styled video game entitled Carmen Sandiego Junior Detective.

As with the rest of the Carmen Sandiego franchise, the show's basic premise had the ACME Detective Agency attempting to stop the title thief and her V.I.L.E. gang from stealing artifacts around the world. Specifically, Where on Earth is Carmen Sandiego? followed the adventures of two teenaged ACME detectives named Zack and Ivy. Zack and Ivy were also siblings, but their last name was never stated nor was their mysterious lack of parents or a guardian ever explained. Notably, the show was portrayed as taking place inside a computer game. The opening and closing of each show has the player communicating with Carmen via computer. Zack and Ivy will often ask for the player to open C5 corridors. Also, the game's menu is sometimes used as a transition between scenes.

Originally, episodes of the series were quite similar to the typical "formula" of the computer games. An outrageous theft would be committed somewhere in the world and Zack and Ivy, guided by the Player, would try to retrieve the loot and capture Carmen Sandiego. Though the loot would typically be recovered, Carmen, who usually had some kind of "master plan", would always escape. Towards the end of the first season, time travel was added into the show when Carmen built her own time machine and travelled back in time to the American Revolution. Time travel would continue to recur throughout the rest of the show's run.

However, this structure began to be abandoned as the writers started to explore the nature of Carmen's character. Early on, it was established that Carmen only stole for the challenge of it and that she had her own ethical code, but, as it progressed, the show began to increasingly focus on her "good" side and on her weaknesses. By the show's fourth and final season, Zack and Ivy were regularly teaming up with their former nemesis to stop considerably less moral criminals from taking over V.I.L.E. and such. Nevertheless, the show never portrayed Carmen returning to ACME or giving up her thieving ways.

Carmen Sandiego (voiced by Rita Moreno) — Carmen Sandiego is an international thief and the head of V.I.L.E. Despite the name of her organization, she has a strong code of morals and only steals for the challenge of it. She was a former agent of the ACME Detective Agency.

Chief (voiced by Rodger Bumpass) — The C.H.I.E.F. (short for Computerized Holographic Imaging Educational Facilitator) is the head of ACME. His role consisted of providing exposition, information, alerts of Carmen's recent crime and comic relief. He had a very intimate professional and personal relationship with Carmen.

Ivy (voiced by Jennifer Hale) — Ivy has short red hair, green eyes, and is eighteen years old. She is the elder of the show's star siblings. Her skills include having multiple black belts in martial arts and being an expert pilot. She can get frustrated easily, such as hating it when Zack calls her "sis" or when Carmen is getting away.

Zack (voiced by Scott Menville) — Zack has blond hair, blue eyes, and is fourteen years old. He is a genius who can speak over 20 languages and has a photographic memory. He, also, is very good at sciece and engineering. He takes cases less seriously than his sister Ivy. It should be noted that Zack's jacket has his name misspelled as Zak.

Player (voiced by Joanie Tucker (Season 1); Justin Shenkarow (Season 2); Asi Lang (Season 3-4); Joanie Pleasant (Season 3-4)) — The only live-action character on the program, always seen from behind as a computer player at the beginning and closing of the show.

The need for the show was facilitated by the Children's Television Act. Said Andy Heyward, CEO of DIC in March, 1994, "I would like to say that people felt it was a competitive property in its own right, but I think that Congress pushed it over the top." The script for every episode had to meet the approval of Brøderbund Software, which created and, at the time, owned the Carmen franchise. Their cause for concern was the level of the violence on other FOX children's shows such as X-Men and Mighty Morphin Power Rangers. Brøderbund did not require this of the creators of the World and Time game shows that aired on PBS, presumably since PBS, as the creator of such shows as Sesame Street, had a long-standing reputation for non-violent, educational children's programming.[1][2]

Although Where on Earth is Carmen Sandiego? took the premise of the series more seriously than the Brøderbund computer games or the zany World game show, most elements of the series, such as giving V.I.L.E. agents gag names ("Buck N. Bronco", "Dee Tritus", etc.) and having Carmen commit spectacularly impossible thefts, were faithfully maintained. However, the series often showed how V.I.L.E. perpetrated such spectacular thefts, whereas the computer games left this to the user's imagination, and "serious" villains, such as Lee Jordan and Dr. Maelstrom, were not given such funny names. The World game show also explained how such thefts were committed although their explanations were humorously nonsensical.

Since they obviously continued to approve the scripts, Brøderbund apparently did not have any qualms about any changes to plot elements, though they did not incorporate them into any of their games. The lead characters of the series were, however, featured in Carmen Sandiego: Junior Detective Edition, released in 1995.

Where on Earth is Carmen Sandiego? has a total of 40 episodes spread over 4 seasons that were produced from February 1994 to January 1999.